Check out these popular adult titles that will hit our collection in April. To see more titles, including new titles in popular series, check out our new titles page. 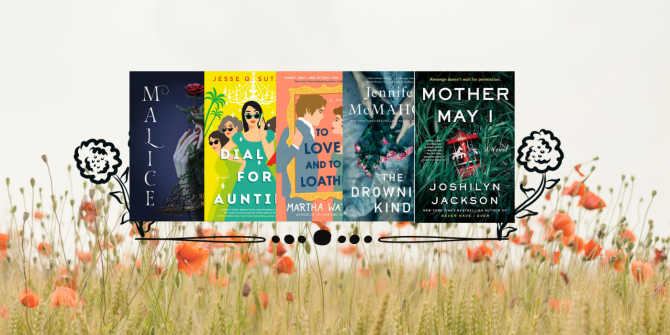 A princess isn’t supposed to fall for an evil sorceress. But in Malice, by Heather Walter - and book one of the Malice Duology - true love is more than a simple fairy tale.

Once upon a time, there was a wicked fairy who, in an act of vengeance, cursed a line of princesses to die. A curse that could only be broken by true love’s kiss. You’ve heard this before, haven’t you? The handsome prince. The happily ever after. Utter nonsense.

Let me tell you, no one in Briar actually cares about what happens to its princesses. Not the way they care about their jewels and elaborate parties and charm-granting elixirs. I thought I didn’t care, either. Until I met her.

Princess Aurora. The last heir to Briar’s throne. Kind. Gracious. The future queen her realm needs. One who isn’t bothered that I am Alyce, the Dark Grace, abhorred and feared for the mysterious dark magic that runs in my veins. Humiliated and shamed by the same nobles who pay me to bottle hexes and then brand me a monster. Aurora says I should be proud of my gifts. That she cares for me. Even though a power like mine was responsible for her curse.

But with less than a year until that curse will kill her, any future I might see with Aurora is swiftly disintegrating - and she can’t stand to kiss yet another insipid prince. I want to help her. If my power began her curse, perhaps it’s what can lift it. Perhaps together we could forge a new world.

Nonsense again. Because we all know how this story ends, don’t we? Aurora is the beautiful princess. And I - I am the villain.

When Meddelin Chan ends up accidentally killing her blind date, her meddlesome mother calls for her even more meddlesome aunties to help get rid of the body in Dial A For Aunties, by Jesse Q. Sutanto.

Unfortunately, a dead body proves to be a lot more challenging to dispose of than one might anticipate, especially when it is inadvertently shipped in a cake cooler to the over-the-top billionaire wedding Meddy, her Ma, and aunties are working at an island resort on the California coastline. It's the biggest job yet for the family wedding business - "Don't leave your big day to chance, leave it to the Chans!" - and nothing, not even an unsavory corpse, will get in the way of her auntie's perfect buttercream flowers.

But things go from inconvenient to downright torturous when Meddy's great college love - and biggest heartbreak - makes a surprise appearance amid the wedding chaos. Is it possible to escape murder charges, charm her ex back into her life, and pull off a stunning wedding all in one weekend?

The author of To Have and to Hoax returns with another swoon-worthy novel about a man and woman who never agree on anything - until they agree to a no-strings-attached affair in To Love And To Loathe, by Martha Waters.

The widowed Diana, Lady Templeton and Jeremy, Marquess of Willingham are infamous among English high society as much for their sharp-tongued bickering as their flirtation.

One evening, an argument at a ball turns into a serious wager: Jeremy will marry within the year or Diana will forfeit one hundred pounds. So shortly after, just before a fortnight-long house party at Elderwild, Jeremy’s country estate, Diana is shocked when Jeremy appears at her home with a very different kind of proposition.

After his latest mistress unfavorably criticized his skills in the bedroom, Jeremy is looking for reassurance, so he has gone to the only woman he trusts to be totally truthful. He suggests that they embark on a brief affair while at the house party - Jeremy can receive an honest critique of his bedroom skills and widowed Diana can use the gossip to signal to other gentlemen that she is interested in taking a lover.

Diana thinks taking him up on his counter-proposal can only help her win her wager. With her in the bedroom and Jeremy’s marriage-minded grandmother, the formidable Dowager Marchioness of Willingham, helping to find suitable matches among the eligible ladies at Elderwild, Diana is confident her victory is assured. But while they’re focused on winning wagers, they stand to lose their own hearts.

The Drowning Kind by Jennifer McMahon, is about a woman who returns to the old family home after her sister mysteriously drowns in its swimming pool…but she’s not the pool’s only victim.

When social worker Jax receives nine missed calls from her older sister, Lexie, she assumes that it’s just another one of her sister’s episodes. Manic and increasingly out of touch with reality, Lexie has pushed Jax away for over a year.

But the next day, Lexie is dead: drowned in the pool at their grandmother’s estate. When Jax arrives at the house to go through her sister’s things, she learns that Lexie was researching the history of their family and the property. And as she dives deeper into the research herself, she discovers that the land holds a far darker past than she could have ever imagined.

In 1929, thirty-seven-year-old newlywed Ethel Monroe hopes desperately for a baby. In an effort to distract her, her husband whisks her away on a trip to Vermont, where a natural spring is showcased by the newest and most modern hotel in the Northeast. Once there, Ethel learns that the water is rumored to grant wishes, never suspecting that the spring takes in equal measure to what it gives.

Mother May I, by Joshilyn Jackson, is a novel of domestic suspense in which a mother must decide how far she is willing to go to protect her child and the life she loves.

Growing up poor in rural Georgia, Bree Cabbat was warned that the world was a dark and scary place. Bree rejected that fearful outlook, and life has proved her right. Having married into a family with wealth, power, and connections, Bree now has all a woman could ever dream of.

Until the day she awakens and sees someone peering into her bedroom window - an old gray-haired woman dressed all in black who vanishes as quickly as she appears. It must be a play of the early morning light or the remnant of a waking dream, Bree tells herself, shaking off the bad feeling that overcomes her.

Later that day though, she spies the old woman again, in the parking lot of her daugh­ters’ private school . . . just minutes before Bree’s infant son, asleep in his car seat only a few feet away, vanishes. It happened so quickly - Bree looked away only for a second. There is a note left in his place, warning her that she is being is being watched; if she wants her baby back, she must not call the police or deviate in any way from the instructions that will follow.

The mysterious woman makes contact, and Bree learns she, too, is a mother. Why would another mother do this? What does she want? And why has she targeted Bree? Of course Bree will pay anything, do anything. It’s her child.

To get her baby back, Bree must complete one small - but critical - task. It seems harmless enough, but her action comes with a devastating price.

BONUS! The highly anticipated new thriller in Caroline Kepnes’s hit You series, You Love Me: A You Novel now a blockbuster Netflix show.

Joe is done with the cities. He’s done with the muck and the posers, done with Love. Now, he’s saying hello to nature, to simple pleasures on a cozy island in the Pacific Northwest. For the first time in a long time, he can just breathe.

He gets a job at the local library - he does know a thing or two about books - and that’s where he meets her: Mary Kay DiMarco. Librarian. Joe won’t meddle, he will not obsess. He’ll win her the old-fashioned way, by providing a shoulder to cry on, a helping hand. Over time, they’ll both heal their wounds and begin their happily ever after in this sleepy town.

True love can only triumph if both people are willing to make room for the real thing. Joe cleared his decks. He’s ready. And hopefully, with his encouragement and undying support, Mary Kay will do the right thing and make room for him.