Check out these popular adult titles that will hit our collection in February. To see more titles, including new titles in popular series, check out our new titles page. 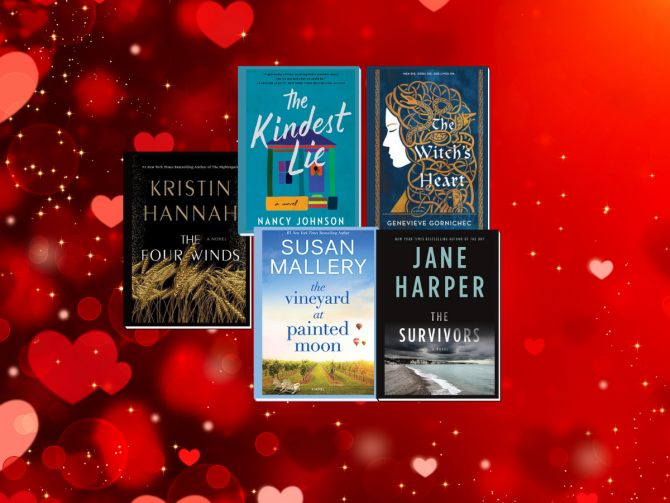 The Four Winds by Kristin Hannah, the number-one New York Times best-selling author of The Nightingale and The Great Alone, is an epic novel of love and heroism and hope, set against the backdrop of one of America’s most defining eras - the Great Depression.

Texas, 1934. Millions are out of work and drought has broken the Great Plains. Farmers are fighting to keep their land and their livelihoods as the crops are failing, the water is drying up, and dust threatens to bury them all. One of the darkest periods of the Great Depression, the Dust Bowl era, has arrived with a vengeance.

In this uncertain and dangerous time, Elsa Martinelli - like so many of her neighbors - must make an agonizing choice: Fight for the land she loves or go west, to California, in search of a better life. The Four Winds is an indelible portrait of America and the American Dream, as seen through the eyes of one indomitable woman whose courage and sacrifice will come to define a generation.

Step into the vineyard with Susan Mallery’s most irresistible novel yet, as one woman searches for the perfect blend of love, family, and wine: The Vineyard at Painted Moon.

Mackenzie Dienes seems to have it all - a beautiful home, close friends, and a successful career as an elite winemaker with the family winery. There’s just one problem - it’s not her family; it’s her husband’s. In fact, everything in her life is tied to him - his mother is the closest thing to a mom that she’s ever had, their home is on the family compound, his sister is her best friend. So, when she and her husband admit their marriage is over, her pain goes beyond heartbreak. She’s on the brink of losing everything. Her job, her home, her friends, and, worst of all, her family.

Staying is an option. She can continue to work at the winery, be friends with her mother-in-law, hug her nieces and nephews - but as an employee, nothing more. Or, she can surrender every piece of her heart in order to build a legacy of her own. If she can dare to let go of the life she thought she wanted, she might discover something even more beautiful waiting for her beneath a painted moon.

The Kindest Lie, by Nancy Johnson, is a masterful and eye-opening novel about the profound racial injustices and class inequalities roiling American society.

It’s 2008, and the inauguration of President Barack Obama ushers in a new kind of hope. In Chicago, Ruth Tuttle, an Ivy League-educated Black engineer, is married to a kind and successful man. He’s eager to start a family, but Ruth is uncertain. She has never gotten over the baby she gave birth to - and was forced to leave behind - when she was a teenager. She had promised her family she’d never look back, but Ruth knows that to move forward, she must make peace with the past.

Returning home, Ruth discovers the Indiana factory town of her youth is plagued by unemployment, racism, and despair. As she begins digging into the past, she unexpectedly befriends Midnight, a young white boy who is also adrift and looking for a connection. Just as Ruth is about to uncover a burning secret her family desperately wants to keep hidden, a traumatic incident strains the town’s already searing racial tensions, sending Ruth and Midnight on a collision course that could upend both their lives.

When a banished witch falls in love with the legendary trickster Loki, she risks the wrath of the gods in this moving, subversive debut novel that reimagines Norse mythology in The Witch's Heart, by Genevieve Gornichec.

Angrboda’s story begins where most witches' tales end: with a burning. A punishment from Odin for refusing to provide him with knowledge of the future, the fire leaves Angrboda injured and powerless, and she flees into the farthest reaches of a remote forest. There, she is found by a man who reveals himself to be Loki, and her initial distrust of him transforms into a deep and abiding love.

Their union produces three unusual children, each with a secret destiny, who Angrboda is keen to raise at the edge of the world, safely hidden from Odin’s all-seeing eye. But as Angrboda slowly recovers her prophetic powers, she learns that her blissful life - and possibly all of existence - is in danger.

With help from the fierce huntress Skadi, with whom she shares a growing bond, Angrboda must choose whether she’ll accept the fate that she’s foreseen for her beloved family...or rise to remake their future. From the most ancient of tales this novel forges a story of love, loss, and hope for the modern age.

Kieran Elliott's life changed forever on the day a reckless mistake led to devastating consequences. The guilt that still haunts him resurfaces during a visit with his young family to the small coastal community he once called home.

Kieran's parents are struggling in a town where fortunes are forged by the sea. Between them all is his absent brother, Finn. When a body is discovered on the beach, long-held secrets threaten to emerge.

A sunken wreck, a missing girl, and questions that have never washed away.