Check out these popular adult titles that will hit our collection in March. To see more titles, including new titles in popular series, check out our new titles page. 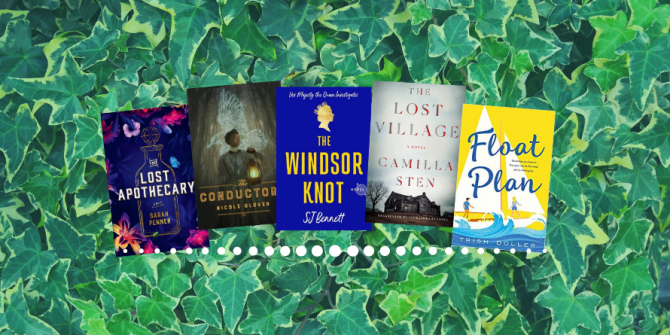 A forgotten history. A secret network of women. A legacy of poison and revenge. Welcome to The Lost Apothecary, by Sarah Penner.

Hidden in the depths of 18th-century London, a secret apothecary shop caters to an unusual kind of clientele. Women across the city whisper of a mysterious figure named Nella who sells well-disguised poisons to use against the oppressive men in their lives. But the apothecary’s fate is jeopardized when her newest patron, a precocious 12-year-old, makes a fatal mistake, sparking a string of consequences that echo through the centuries.

Meanwhile, in present-day London, aspiring historian Caroline Parcewell spends her 10th wedding anniversary alone, running from her own demons. When she stumbles upon a clue to the unsolved apothecary murders that haunted London 200 hundred years ago, her life collides with the apothecary’s in a stunning twist of fate - and not everyone will survive.

With crackling suspense, unforgettable characters, and searing insight, The Lost Apothecary is a subversive and intoxicating debut novel of secrets, vengeance, and the remarkable ways women can save each other despite the barrier of time.

A compelling debut by a new voice in fantasy fiction, The Conductors, by Nicole Glover, features the magic and mystery of Jim Butcher’s Dresden Files series written with the sensibility and historical setting of Octavia Butler’s Kindred.

Now that the Civil War is over, Hetty and her husband, Benjy, have settled in Philadelphia, solving murders and mysteries that the white authorities won’t touch. When they find one of their friends slain in an alley, Hetty and Benjy bury the body and set off to find answers. But the secrets and intricate lies of the elites of Black Philadelphia only serve to dredge up more questions. To solve this mystery, they will have to face ugly truths all around them, including the ones about each other.

This is Book #1 in the Magic and Murder series.

The Windsor Knot, by Sj Bennett, is the first book in a highly original and delightfully clever crime series in which Queen Elizabeth II secretly solves crimes while carrying out her royal duties.

It is the early spring of 2016, and Queen Elizabeth is at Windsor Castle in advance of her 90th birthday celebrations. But the preparations are interrupted when a guest is found dead in one of the Castle bedrooms. The scene suggests the young Russian pianist strangled himself, but a badly tied knot leads MI5 to suspect foul play was involved. The Queen leaves the investigation to the professionals - until their suspicions point them in the wrong direction.

Unhappy at the mishandling of the case and concerned for her staff’s morale, the monarch decides to discreetly take matters into her own hands. With help from her assistant private secretary, Rozie Oshodi, a British Nigerian and recent officer in the Royal Horse Artillery, the Queen secretly begins making inquiries. As she carries out her royal duties with her usual aplomb, no one in the Royal Household, the government, or the public knows that the resolute Elizabeth will use her keen eye, quick mind, and steady nerve to bring a murderer to justice.

Sj Bennett captures Queen Elizabeth’s voice with skill, nuance, wit, and genuine charm in this imaginative and engaging mystery that portrays Her Majesty as she’s rarely seen: kind yet worldly, decisive, shrewd, and most importantly a great judge of character.

This is book #1 in the Her Majesty the Queen Investigates series.

Documentary filmmaker Alice Lindstedt has been obsessed with the vanishing residents of the old mining town, dubbed “The Lost Village,” since she was a little girl. In 1959, her grandmother’s entire family disappeared in this mysterious tragedy, and, ever since, the unanswered questions surrounding the only two people who were left - a woman stoned to death in the town center and an abandoned newborn - have plagued her. She’s gathered a small crew of friends in the remote village to make a film about what really happened.

But there will be no turning back.

Not long after they’ve set up camp, mysterious things begin to happen. Equipment is destroyed. People go missing. As doubt breeds fear and their very minds begin to crack, one thing becomes startlingly clear to Alice: They are not alone.

They’re looking for the truth… But what if it finds them first?

In Trish Doller’s unforgettable romance Float Plan, starting over doesn't mean letting go of your past, it means making room for your future.

Heartbroken by the loss of her fiancé, adventurous Anna finds a second chance at love with an Irish sailor in this riveting, emotional romance.

After a reminder goes off for the Caribbean sailing trip Anna was supposed to take with her fiancé, she impulsively goes to sea in the sailboat he left her, intending to complete the voyage alone.

But, after a treacherous night’s sail, she realizes she can’t do it by herself and hires Keane, a professional sailor, to help. Much like Anna, Keane is struggling with a very different future than the one he had planned. As romance rises with the tide, they discover that it’s never too late to chart a new course.

Mated werewolves Charles Cornick and Anna Latham must discover what could make an entire community disappear - before it's too late - in this thrilling entry in the number-one New York Times best-selling Alpha and Omega series: Wild Sign, by Patricia Briggs.

In the wilds of the Northern California mountains, all the inhabitants of a small town have gone missing. It's as if the people picked up and left their possessions behind. With a mystery on their hands and no jurisdiction on private property, the FBI dumps the whole problem in the lap of the landowner, Aspen Creek, Inc. - a.k.a. the business organization of the Marrok's pack.

Somehow, the pack of the Wolf Who Rules is connected to a group of vanished people. Werewolves Charles Cornick and Anna Latham are tasked with investigating and soon find that a deserted town is the least of the challenges they face.

Death sings in the forest, and, when it calls, Charles and Anna must answer. Something has awakened in the heart of the California mountains, something old and dangerous - and it has met werewolves before.