Check out these popular adult titles that will hit our collection in May. To see more titles, including new titles in popular series, check out our new titles page. 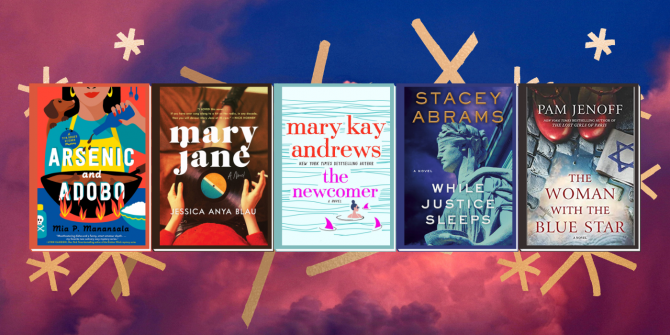 The first book in a new culinary cozy series, Arsenic and Adobo, by Mia P. Manansala, is full of sharp humor, delectable dishes, and plenty of murder.

When Lila Macapagal moves back home to recover from a horrible breakup, her life seems to be following all the typical rom-com tropes when she's suddenly tasked with saving her Tita (aunt) Rosie's failing restaurant, which comes with a barrage of other annoying aunties. When a notoriously nasty food critic (who happens to be her ex-boyfriend) drops dead moments after a confrontation with Lila, her life quickly swerves from a Nora Ephron romp to an Agatha Christie case.

With the cops treating her like she's the one-and-only-suspect, and the shady landlord looking to finally kick the Macapagal family out and resell the storefront, Lila's left with no choice but to conduct her own investigation. Armed with the nosy auntie network, her barista best bud, and her trusted Dachshund, Longanisa, Lila takes on this tasty, twisted case and soon finds her own neck on the chopping block.

Mary Jane, by Jessica Anya Blau, is Almost Famous meets Daisy Jones & The Six in this funny, wise, and tender novel about a 14-year-old girl’s coming-of-age in 1970s Baltimore, caught between her straight-laced family and the progressive family she nannies for.

Mary Jane loves cooking with her mother, singing in her church choir, and enjoying her family’s subscription to the Broadway Showtunes of the Month record club. Shy, quiet, and bookish, she’s glad when she lands a summer job as a nanny for the daughter of a local doctor. "A respectable job," Mary Jane’s mother says. "In a respectable house."

The house may look respectable on the outside, but inside it’s a literal and figurative mess: clutter on every surface, Impeachment: Now More Than Ever bumper stickers on the doors, cereal and takeout for dinner. The head of the household is a psychiatrist, who has cleared his summer for one important job - helping a famous rock star dry out. A week after Mary Jane starts, the rock star and his movie star wife move in.

Over the course of the summer, Mary Jane introduces her new household to crisply ironed clothes and a family dinner schedule and has a front-row seat to a liberal world of sex, drugs, and rock-and-roll (not to mention group therapy). Caught between the lifestyle she’s always known and the future she’s only just realized is possible, Mary Jane will end the summer with a new idea about what she wants out of life and what kind of person she’s going to be.

Mary Kay Andrews, the New York Times bestselling author and "Queen of the Beach Reads," delivers her next page-turner for the summer with The Newcomer.

After she discovers her sister dead on the floor of her fashionable New York City townhouse, Letty Carnahan is certain she knows who did it: Tanya’s ex, sleazy real estate entrepreneur Evan Wingfield. Even in the grip of grief and panic Letty heeds her late sister’s warnings: “If anything bad happens to me - it’s Evan. Promise me you’ll take Maya and run. Promise me.”

So Letty grabs her sister’s Mercedes and hits the road with her wailing four-year-old niece Maya. She's determined to out-run Evan and the law, but, run to where? Her sister, a woman with a past shrouded in secrets, left behind a “go-bag” of cash and a big honking diamond ring - but only one clue: a faded magazine story about a sleepy mom-and-pop motel in a Florida beach town with the improbable name of Treasure Island. Letty sheds her old life and checks into an uncertain future at The Murmuring Surf Motel.

And that’s the good news. Because The Surf, as the regulars call it, is the winter home of a close-knit flock of retirees and snowbirds who regard this odd-duck newcomer with suspicion and down-right hostility. As Letty settles into the motel’s former storage room, she tries to heal Maya’s heartache and find the key to her sister’s shady past, all while dodging the attention of the owner’s dangerously attractive son Joe, who just happens to be a local police detective.

Can Letty find romance as well as a room at the inn - or will Joe betray her secrets and put her behind bars? With danger closing in, it’s a race to find the truth and right the wrongs of the past.

Stacey Abrams' While Justice Sleeps is a gripping, complexly plotted thriller set within the halls of the U.S. Supreme Court.

Avery Keene, a brilliant young law clerk for the legendary Justice Howard Wynn, is doing her best to hold her life together - excelling in an arduous job with the court while also dealing with a troubled family. When the shocking news breaks that Justice Wynn has slipped into a coma, Avery’s life turns upside down: she is immediately notified that Justice Wynn has left instructions for her to serve as his legal guardian and hold power of attorney.

Plunged into an explosive role she never anticipated, Avery finds that Justice Wynn had been secretly researching one of the most controversial cases before the court - a proposed merger between an American biotech company and an Indian genetics firm, which promises to unleash breathtaking results in the medical field.

As political wrangling ensues in Washington to potentially replace the ailing judge whose life and survival Avery controls, she begins to unravel a carefully constructed sequence of clues left behind by Wynn. She comes to see that Wynn had a much more personal stake in the controversial case and realizes his complex puzzle will lead her directly into harm’s way in order to find the truth.

The Woman With the Blue Star, by Pam Jenoff, is a riveting tale of courage and unlikely friendship during World War II.

1942. Sadie Gault is 18 and living with her parents in the Kraków Ghetto during World War II. When the Nazis liquidate the ghetto, Sadie and her pregnant mother are forced to seek refuge in the perilous tunnels beneath the city. One day Sadie looks up through a grate and sees a girl about her own age buying flowers.

Ella Stepanek is an affluent Polish girl living a life of relative ease with her stepmother, who has developed close alliances with the occupying Germans. While on an errand in the market, she catches a glimpse of something moving beneath a grate in the street. Upon closer inspection, she realizes it’s a girl hiding.

Ella begins to aid Sadie, and the two become close, but, as the dangers of the war worsen, their lives are set on a collision course that will test them in the face of overwhelming odds. Inspired by incredible true stories, The Woman with the Blue Star is an unforgettable testament to the power of friendship and the extraordinary strength of the human will to survive.