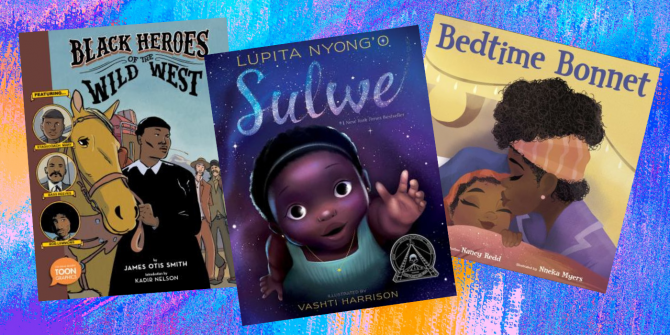 This February, Central Rappahannock Regional Library celebrates African American History with online programs for all ages that can be found at librarypoint.org/African-American-history/. There, you can find a video series focusing on African American inventors and a variety of booklists with recommended titles for all ages. The books below are selections from one of those lists, Our Stories: The African American Experience for Children, which includes titles for readers up through grade 6.

Bedtime Bonnet by Nancy Redd and illustrated by Nneka Myers
A little girl watches as all the members of her family get ready for bed. Her brother twists his locs and slips on a durag, her mother wraps her curls in a scarf, her grandma puts her hair in rollers and a kerchief. While her mother lovingly braids the little girl’s hair, her grandpa tells jokes that make her laugh. But when the little girl can’t find her bedtime bonnet to protect her hair while she sleeps, she calls on the entire family to help search the house.

Black Heroes of the Wild West by James Otis Smith
Smith shines a spotlight on the lives and contributions of African Americans who settled the American “Wild” West by focusing on three heroes of the time: mail coach driver Mary Fields, Deputy U.S. Marshal Bass Reeves, and mustanger Bob Lemmons. Their stories, along with the photographs, reproductions of art, and original illustrations in the book, bring the grit, danger, and wildness of this time period to life.  The backmatter of Black Heroes of the Wild West provides even more information about life in the Wild West, with details on Buffalo Soldiers, Native Americans, cattle drives, and homesteading.

Box by Carole Boston Weatherford and illustrated by Michele Wood
Box tells the story of Henry Brown by incorporating words from his original writing as well as other historical records. Born into slavery, subjected to horrors, and witness to more, when Henry Brown’s wife and children are sold and taken away, he feels he has nothing else to lose and hatches a dangerous and novel plan for escape. He has a wooden box built, then has himself sealed inside and shipped to Philadelphia and freedom.

Lift as You Climb by Patricia Hruby Powell and R. Gregory Christie
Though largely out of the spotlight, Ella Baker was a key organizer in the Civil Rights Movement, working alongside and advising Dr. Martin Luther King, Jr. and other well-known leaders. Baker helped found the Southern Christian Leadership Conference and the Student Nonviolent Coordinating Committee and inspired African Americans from all walks of life to take action to fight for justice and secure their rights, especially people from the middle class and the working poor.

Lizzie Demands A Seat! by Beth Anderson and illustrated by E.B. Lewis
A century before Claudette Colvin and Rosa Parks, Lizzie Jennings demanded a seat. In 1854 New York City, it was legal for Black passengers to ride in the same car as white passengers, but, in reality, Black passengers were often denied seats. When Lizzie Jennings stood up for her rights and the conductor instead delivered her to the police, Jennings sued the streetcar company. Chester A. Arthur, later the 21st president of the United States, argued Jennings’s case, and they won, though it would take another 20 years before segregation on public transportation in New York City was illegal.

Sulwe by Lupita Nyong’o and illustrated by Vashti Harrison
Sulwe’s skin is darker than anyone in her family and any of the other children at school. She is called names that make her feel bad and tries everything she can think of to lighten her skin. When Sulwe’s mother realizes what is happening and how Sulwe feels, she reminds Sulwe that her name means “star” and that her brightness and beauty come from inside of her, that “it begins with how you see yourself, not how others see you.”