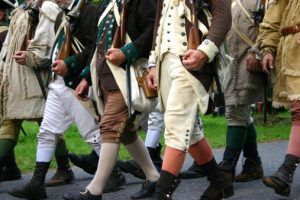 What was it like to live long ago when Virginia belonged to England? When there were no cars, no computers, few hospitals and no free public schools? Without cars, trains or airplanes, people traveled by boat, horseback or on foot by "shank's mare". The reason so many colonial towns were located next to rivers is that often the roads were terrible seas of mud. It was so much easier to travel on the rivers!

With no computers to help with bookkeeping, the colonists kept track of their accounts in big ledger books. Colonial children couldn't use a computer to play video games either. For fun, they played outside together, danced, sang, fished, hunted and rode. In bad weather, they might play board games, sew or whittle. Getting even a little bit sick could be a real problem. Because people didn't have a clear idea of how disease worked, the more expensive the doctor was, the more likely he was to use what we might call strange remedies--like leeches and reuseable silver-plated pills. Sometimes native remedies like the herb snakeroot and crab claws could be used to help patients. Most children did not receive any regular schooling although sometimes little schools did begin in towns or a well-to-do family might hire a tutor for their children.

Not all African Americans were slaves, and not all European-Americans were completely free. Free African Americans made their own way although they faced hard restrictions. Both slaves and indentured servants sometimes ran away to escape their masters. Colonial America had many more opportunities than in Europe, but just like today, your chances for a comfortable life were a lot better if your family was well-off.

You can read local newspapers from the colonial period in the CRRL's Virginiana Room to find out what was important to the farmers and businessmen of the time. Check out these great books and eResources to learn more about what life was like in colonial days.

These nonfiction titles will help you learn more about the life and times of Colonial Americans.

Colonial America (1492-1763)
Created by The Library of Congress. Part of America's Story from America's Library. Learn about the lives of some very famous Virginians such as Patrick Henry, Thomas Jefferson, and George Washington.

A Day in the Life of the Powell Family
Created by Colonial Williamsburg Foundation, Inc. Follow the daily routines of a white middle-class family and their slaves in eighteenth-century Williamsburg.

George Washington's Mount Vernon for Students
An interactive map, a digital encyclopedia, people from the past, primary sources, and specifics on the Yorktown Campaign.

The History Explorer of Colonial Williamsburg
Created by Colonial Williamsburg Foundation, Inc. Check their colonial dateline for important dates in the Virginia colony. Learn, too, about eighteenth-century politics, clothes, manners, religion, and the African-American experience.

Jamestown Fact Sheets
Created by The National Park Service. Nice online articles give information on manufacturing and industries such as silk, drugs, glass, flax, and brewing. Read also about aspects of Jamestown's history and Bacon's Rebellion.