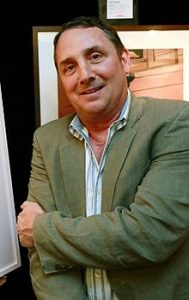 When David Shannon was five-years-old, he wrote a book about himself. On each page, there were different pictures of that showed the story of how he was so very good at getting into trouble. Each page had the words, "No, David!"

Many years later, David was mostly grown-up. He had graduated from high school and gone on to art school. He worked as an illustrator, drawing for books in a rather mature way to go along with stories written by other writers and sometimes himself. He drew amazing pictures of Columbus and the New World, Paul Bunyan's family, pirates, knights, acrobats and baseball players.

When it came to him that he wanted to share the first story he wrote with the wide world, he tried to tell it with the same kind of mostly realistic pictures he had usually drawn, but it just didn't work. To get back to the funny place his five-year-old self had known, David started to draw like a kid again. That worked!

No, David! is not a pretty picture book. It is a funny book, and it is true to the spirit of kidhood. David does all sorts of naughty things, with his parents correcting him and pleading all the while. Despite its lack of beauty, No, David! won the prestigious Caldecott Honor in 1999. It shares a lot of the zesty, kid-friendly spirit that shines in a long-ago, still classic Caldecott winner, Maurice Sendak's Where the Wild Things Are.

In order to ensure her popularity, Camilla Cream always does what is expected, until the day arrives when she no longer recognizes herself.

A duck decides to ride a bike and soon influences all the other animals on the farm to ride bikes too.

A young boy is depicted doing a variety of naughty things for which he is repeatedly admonished, but finally, he gets a hug.

An unexpected rain shower causes quarreling among the members of a small community.

There are not many print articles about David Shannon, but you can find written interviews and video discussions online.

Back to School with David Shannon
www.bookpage.com/9909bp/david_shannon.html
The author talks about how his naughty character David copes with the school routine.

David Shannon's Interview
www.hipark.austin.isd.tenet.edu/grade3/pounds/ds_interview_ts.htm
Teachers and students at Highland Park Elementary ask the author about A Bad Case of Stripes, the David books, the Fergus books, his writing, his illustrations, and his family.

A Video Interview with David Shannon
www.readingrockets.org/books/interviews/shannon
"In this exclusive video interview with Reading Rockets, David Shannon talks about his love for bright colors, his distaste for lima beans, and where he gets the ideas for his books."
You can watch the video or read the transcript.