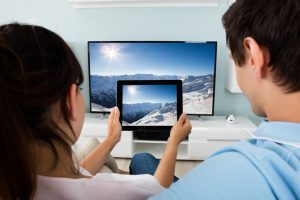 TV Is Dead. Long Live TV!In these lean times, we’re all looking for ways to cut household costs. You may be pondering whether you should ditch the cable TV or the broadband Internet to free up $50 a month. Take my advice and lose the cable. Heck, even if you aren’t in a financial pickle, go ahead and dump it. Your life will be better for it. Here’s why.

It’s All Online Anyway
The latest few episodes of almost all your favorite shows are available to watch online within a week of airing on TV. Most of the major networks stream their shows from their Web sites:

Or, you can watch them all at either Hulu.com(http://www.hulu.com/browse/alphabetical/episode) or IMDB.com (http://www.imdb.com/features/video/browse/tv/).

You Can Still Watch it On Your TV
Of course, watching TV on a computer screen isn’t everyone’s cup of tea. No worries though, because there’s more than one way to watch Internet video on your TV!

If you’ve got a computer to spare and you own an HDTV, it’s a fairly simple matter of running a monitor cable from the VGA ports (http://en.wikipedia.org/wiki/File:SVGA_port.jpg) on your computer and TV and a two-way audio cable (one end may need to be a 1/8th inch audio jack and a red/white RCA jack at the other, as shown here: http://ecx.images-amazon.com/images/I/41TesNolIXL._SL500_AA280_.jpg). Just check to make sure you do have matching video ports on the computer and TV. Matching DVI or HDMI ports will provide even better picture quality.

The addition of a wireless keyboard and mouse can go a long way toward converting the whole setup into more of a media center appliance. This may seem like more of an investment than you want to make, but after a month without cable, the setup will have paid for itself. Even the purchase of a cheap, lower-end desktop computer without a monitor will have paid for itself after a year without cable, give a take a few months.

If you own one of the three current-generation gaming consoles (the Wii, Xbox 360, or PlayStation 3), a PC, and have wifi at home, you can install a media server such as TVersity (http://tversity.com/) on the PC and configure it to stream Hulu and other media sites, not to mention all of the other digital media files you own, to your TV via your gaming console (http://tversity.com/support/).

The adventurous Apple TV owners out there (http://www.apple.com/appletv/) may be able to hack their devices to play streaming media using the Boxee (http://www.boxee.tv/homepage/) media player software (http://howto.wired.com/wiki/Hack_Your_Apple_TV_With_Boxee), though doing so can prove tricky.

Pay for What You Want and Only What You Want
Netflix is a wonderful service if you can go without being completely up-to-date with your TV shows, as almost all of them are released on DVD. As an added bonus, Netflix also offers complimentary streaming of older movies and TV shows with most of their subscription packages. With the purchase of a Roku player (http://www.roku.com/home/), an Xbox 360, or other Netflix-enabled-device (http://www.netflix.com/NetflixReadyDevicesList) you can watch Netflix streaming on your TV. The Roku can also play digital TV shows and movies purchased via Amazon.com Video on Demand (http://www.amazon.com/gp/video/ontv/start), which is host to a large amount of quality entertainment.

So, with a broadband Internet connection and a small investment in new computer equipment or even the re-purposing of older equipment, you can free yourself from the burden of a cable subscription completely. I’ve been living cable-free for years now and, though as a librarian I’m a little ashamed to say it, I probably watch more TV shows than if I only had cable. That caveat aside, now’s the time to say goodbye to cable TV for good.