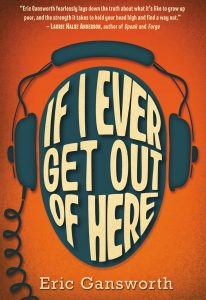 If I Ever Get Out of Here centers around Lewis Blake, a Native American teenager in a gifted junior high program. Lewis might be academically successful, but he has no friends. All his white classmates don't have much to say to Lewis, and all of the kids from the reservation are just in the regular classes.

It is 1976, and living outside of Buffalo, New York, Lewis wonders if the area's teachers are going to be surprised when they find that the Native American kids are not that excited about the country's Bicentennial celebration. His family has called this land "home" for much longer than a mere two hundred years.

Lewis is determined to make a new friend at school this year, and his chance comes when a new kid named George enters his class.

George is from an Air Force family, and he wastes little time in making friends, finding in Lewis a kindred spirit. They bond over music by Queen and The Beatles. There are still snags to the friendship. George mentions that his father knew Native Americans when he was a boy, but won't explain in what way.

Meanwhile, Lewis is afraid to invite George to his house on the reservation, which would reveal just how embarrassingly poor his family really is. Plus, there is a terrible bully targeting Lewis, one whose father has deep pockets and basically runs the town.

The book's title is a lyric from one of Paul McCartney's best post-Beatles songs, "Band on the Run." The song is a mini-suite, stitching together three smaller, disparate pieces. The fact that the book's title is culled from the moodiest, most churning segment is no coincidence. The line sums up both the song and the book quite concisely. Lewis feels like there is little chance in escaping reservation life, despite his good grades.

Each chapter title is based on a different song, mainly by the Beatles, Wings, or Queen. Gansworth even provides a song playlist in the back of the book as well as on his website.

If I Ever Get Out of Here does a solid job at depicting a male friendship over the course of two years. It also offers a nice portrayal of military families and how tough it can be to have to move around so much.

There are a couple of fantastic teen books that this title reminded me of. The Absolutely True Diary of a Part-time Indian, by Sherman Alexie, also shows a Native American kid going to school with a white majority. Alexie's book is breezier and funnier, with some Wimpy Kid-esque illustrations. Gansworth's story rings truer to me, though. The detailed accounts of Lewis' poverty along with the bully situation seem authentic, like Gansworth is trying to get some pent-up feelings off of his chest.

John Barnes' Tales of the Madman Underground is the other similar title. This book is also set in the mid-seventies and follows a number of high school students in a special therapy group. Though they are all from different cliques and backgrounds, they look out for each other through the worst of times.

All three of these books, due to their content, are best for a high school reader. None of these authors pull their punches in terms of crafting a treacherous world for their protagonists to navigate. If you're a fan of classic rock, or just want to read a story about a great realistic friendship, If I Ever Get Out of Here is for you.