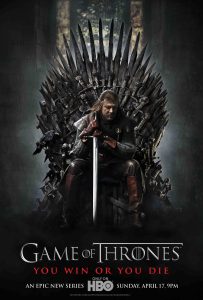 The Starks of Winterfell is a family as harsh and unyielding as the land they were born to. Sweeping from a land of brutal cold to a distant summertime kingdom of epicurean plenty, here is a tale of lords and ladies, soldiers and sorcerers, assassins and bastards, who come together in a time of grim omens. Here an enigmatic band of warriors bear swords of no human metal; a tribe of fierce wildlings carry men off into madness; a cruel young dragon prince barters his sister to win back his throne, and a determined woman undertakes the most treacherous of journeys.

A Game of Thrones

There are four other books in the Song of Ice and Fire series: A Clash of Kings, A Storm of Swords, A Feast for Crows, and A Dance With Dragons. Two more books have been announced: The Winds of Winter and A Dream of Spring, which have no release dates yet.

The television show Game of Thrones has attracted huge record viewership on HBO since 2011 and has a broad, active, international fan base. The series has received 38 Primetime Emmy Awards, including Outstanding Drama Series in 2015 and 2016, more than any other primetime scripted television series. Its other awards and nominations include three Hugo Awards for Best Dramatic Presentation (2012–2014), a 2011 Peabody Award, and four nominations for the Golden Globe Award for Best Television Series – Drama (2012 and 2015–2017). Of the ensemble cast, Peter Dinklage has won two Primetime Emmy Awards for Outstanding Supporting Actor in a Drama Series (2011 and 2015) and the Golden Globe Award for Best Supporting Actor – Series, Miniseries or Television Film (2012) for his performance as Tyrion Lannister. Its seventh season ended on August 27, 2017. The series will conclude with its eighth season premiering either in 2019.

For more action, and adventure, check out these book titles similar to the epic high-fantasy of A Game of Thrones.

View more suggestions for books like A Game of Thrones.