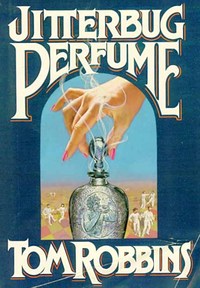 Jitterbug Perfume is an epic. Which is to say, it begins in the forests of ancient Bohemia and doesn't conclude until nine o'clock tonight (Paris time). It is a saga, as well. A saga must have a hero, and the hero of this one is a janitor with a missing bottle. The bottle is blue, very, very old, and embossed with the image of a goat-horned god. If the liquid in the bottle actually is the secret essence of the universe, as some folks seem to think, it had better be discovered soon because it is leaking and there is only a drop or two left.

If you want another kooky but laugh-out-loud novel like Robbin's bizarre masterpiece, check out these titles.