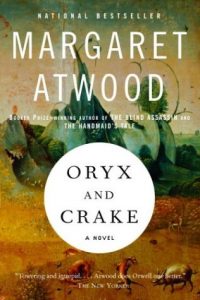 The narrator of Atwood's riveting novel calls himself Snowman. When the story opens, he is sleeping in a tree, wearing an old bedsheet, mourning the loss of his beloved Oryx and his best friend Crake, and slowly starving to death. He searches for supplies in a wasteland where insects proliferate and pigoons and wolvogs ravage the pleeblands, where ordinary people once lived, and the Compounds that sheltered the extraordinary. As he tries to piece together what has taken place, the narrative shifts to decades earlier. How did everything fall apart so quickly? Why is he left with nothing but his haunting memories? Alone except for the green-eyed Children of Crake, who think of him as a kind of monster, he explores the answers to these questions in the double journey he takes - into his own past, and back to Crake's high-tech bubble-dome, where the Paradice Project unfolded and the world came to grief.

If you want another compelling dystopian novel that involves power beyond our control - nature or otherwise - check out these suggestions.

Hundreds of years in the future, the World Controllers have created an ideal civilization. Its members, shaped by genetic engineering and behavioral conditioning, are productive and content in roles they have been assigned at conception. Only Bernard Marx is discontented, developing an unnatural desire for solitude. When he brings back a young man from one of the few remaining Savage Reservations, where the old unenlightened ways still continue, he unleashes a dramatic clash of cultures that will force him to consider whether freedom, dignity, and individuality are worth suffering for.

In the future after a devastating global nuclear war, David lives in a tight-knit community of religious and genetic fundamentalists, always on the alert for any deviation from the norm of God's creation. At first, David does not question. Then, however, he realizes that he too is out of the ordinary, in possession of a power that could doom him to death or introduce him to a new, hitherto unimagined world of freedom.

A small group of apocalypse survivors stranded on the Galapagos Islands are about to become the progenitors of a brave new human race.

Two creatures, the end result of experiments in genetic engineering and enhanced intelligence, escape from a government laboratory and bring either doom or a touching new kind of love to those they encounter.

The American Southwest has been decimated by drought. Las Vegas water knife Angel Velasquez is a detective, assassin, and spy. He "cuts" water for the Southern Nevada Water Authority, ensuring that lush, luxurious arcology developments can bloom in the desert and that anyone who challenges her is left in the gutted-suburban dust. When water is more valuable than gold, alliances shift like sand, and the only truth in the desert is that someone will have to bleed if anyone hopes to drink.