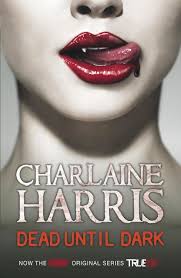 Sookie Stackhouse is just a small-time cocktail waitress in small-town Louisiana. Until the vampire of her dreams walks into her life-and one of her coworkers checks out . . . maybe having a vampire for a boyfriend isn't such a bright idea.

True Blood was a American dark fantasy horror television series on HBO produced and created by Alan Ball and based on The Southern Vampire Mysteries, a series of novels by Charlaine Harris. Sookie Stackhouse is played by Anna Paquin, and Bill Compton is played by Stephen Moyer. The series premiered on September 7, 2008 and concluded on August 24, 2014, comprising seven seasons and 80 episodes. The first five seasons received highly positive reviews, and both nominations and wins for several awards.

If you like Dead Until Dark, the first in the Sookie Stackhouse series, check out the rest of Charlaine Harris' series as well as these suggestions by other authors.