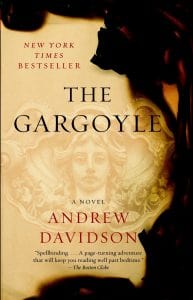 A self-centered adult film star crashes his car into a ravine and suffers horrible burns over much of his body. As he recovers, undergoing the tortures of the damned, he awaits the day when he can leave the hospital and commit carefully planned suicide - for he is now a monster in appearance as well as in soul. Then a beautiful and compelling, but clearly unhinged, sculptress of gargoyles by the name of Marianne Engel appears at the foot of his bed and tells him that they were once lovers in medieval Germany.

If you want another modern-gothic tale that has a little bit of everything (romance, mystery, etc.) check out these suggestions.

View more suggestions for The Gargoyle.