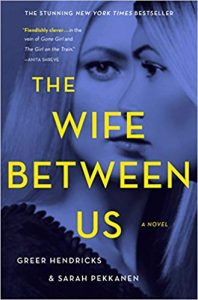 The divorce has just become final, and Richard is already engaged to someone. One woman is determined to change that situation—no matter what it takes. Soon a tangle of lies binds her life with those of Richard and his new fiancée. A tangle of lies - that hide some dangerous truths.

The Wife Between Us

These suspense titles share a similar subject with The Wife Between Us: relationship secrecy. It can come in all shapes and sizes, from cheating husbands to killer husbands.

The perfect marriage? Or the perfect lie? Everyone knows a couple like Jack and Grace. He has looks and wealth, she has charm and elegance. You might not want to like them, but you do. You'd like to get to know Grace better. But it's difficult because you realize Jack and Grace are never apart. Some might call this true love. Others might ask why Grace never answers the phone. Or how she can never meet for coffee, even though she doesn't work. How she can cook such elaborate meals but remain so slim. And why there are bars on one of the bedroom windows.

Elementary school teacher Jacqueline Jacks Morales's marriage was far from perfect, but even in its ups and downs, it was predictable. Familiar. Or at least she thought it was until two police officers showed up at her door with the devastating news. Her husband of eight years, the one who should have been on a business trip to Kansas, had suffered a fatal car accident in Hawaii. And he wasn't alone.

Picture-perfect newlyweds Alice and Jake are unexpectedly initiated into a mysterious organization designed to keep marriages happy and intact through seemingly sensible rules that become increasingly exacting and subject to brutal enforcement.

A young woman has agreed with her faithless husband: it's time for them to separate. As she begins her new life, she gets word that Christopher has gone missing in a remote region in the rugged south of Greece; she reluctantly agrees to go and search for him. In her heart, she's not even sure if she wants to find him. Adrift in the wild landscape, she traces the disintegration of their relationship and discovers she understands less than she thought about the man she used to love.

Todd Gilbert and Jodie Brett are in a bad place in their relationship. They've been together for twenty-eight years, and with no children to worry about there has been little to disrupt their affluent Chicago lifestyle. But there has also been little to hold it together, and beneath the surface lie ever-widening cracks. When it becomes clear that their precarious world could disintegrate at any moment, Jodie knows she stands to lose everything. It's only now she will discover just how much she's truly capable of.

View more suggestions for The Wife Between Us.