The Libraries Transform Book Pick is a popular digital reading program that connects readers nationwide by offering free access to the same eBook through public libraries. This year, Book of the Little Axe, by Lauren Francis-Sharma, has been chosen.

In 1796 Trinidad, young Rosa Rendón quietly but purposefully rebels against the life others expect her to lead. Bright, competitive, and opinionated, Rosa sees no reason she should learn to cook and keep house, for it is obvious her talents lie in running the farm she, alone, views as her birthright. But when her homeland changes from Spanish to British rule, it becomes 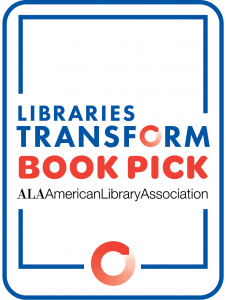 increasingly unclear whether its free black property owners - Rosa’s family among them - will be allowed to keep their assets, their land, and, ultimately, their freedom.

By 1830, Rosa is living among the Crow Nation in Bighorn, Montana, with her children and her husband, Edward Rose, a Crow chief. Her son Victor is of the age where he must seek his vision and become a man. But his path forward is blocked by secrets Rosa has kept from him. So Rosa must take him to where his story began and, in turn, retrace her own roots, acknowledging along the way the painful events that forced her from the middle of an ocean to the rugged terrain of a faraway land.

“We chose Book of the Little Axe by Lauren Francis-Sharma because it is a strikingly original and richly compelling historical novel which illuminates the roots of America’s dire systemic racism. Francis-Sharma’s profoundly relevant saga will surely inspire meaningful discussions. Book of the Little Axe is also exquisitely well-written, and features a strong and fascinating woman protagonist.” - Donna Seaman, Editor, Adult Books, Booklist

Download Book of the Little Axe starting September 14 without having to wait. Dive into the group reading guide and an interview with the author. Don't forget to discuss the book on social media using #LTBookPick!