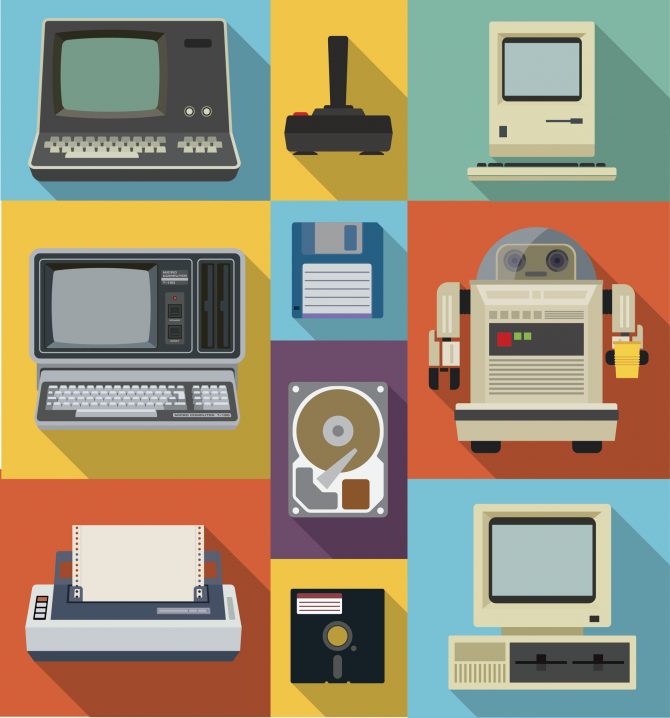 Technology rules over us. I remember what made me the object of ridicule and bullying in middle school is now thoroughly ingrained in every aspect of modern life. These days, we’ve shed more digital technologies than we can probably remember, but we’re still using quite a few that are past their prime. Here is a list of my favorites - which ones didn’t you realize were on their way out?

Optical Storage: I remember back in 1993 when my family installed our first CD-ROM drive on our Intel 386-powered PC running Windows 3.1.  I was blown away by games like Mantis XF5700 Experimental Fighter, Mega Race, Myst, and The 7th Guest (when it felt like running properly) not to mention educational titles like The San Diego Zoo Presents: The Animals, Microsoft Dinosaurs, and, of course, Microsoft Encarta Encyclopedia. I couldn’t believe that a single piece of plastic could hold a whopping 700 megabytes of data, much more than our computer’s 200-megabyte hard drive. Then late in the '90s came DVDs, and I was stunned again, this time that I could actually watch movies on the computer using optical discs the same size as regular CDs that stored many gigabytes of data.

However, as we marched into the aughts, the prices of magnetic and flash storage dropped considerably while their storage capacities began to vastly outstrip those of DVDs.  In 2006 Blu-ray discs came on the scene with storage capabilities of 50 gigabytes, but hard drives of the time were already considerably larger than that.  There was a brief format war between Blu-ray and HD-DVD reminiscent of the 1980s battle of VHS VS Betamax.  While Blu-ray did win, thanks in great part to the Sony PlayStation 3 game console’s inclusion of a Blu-ray drive, it didn’t really matter. Blu-ray players and discs, while superior to DVDs, remained prohibitively expensive for several years after their initial release. Meanwhile, the growth of streaming video positively exploded, due in no small part to Netflix’s streaming video service that has come to dominate peak Internet bandwidth usage.

New Blu-ray standards are being created to deliver 4K Ultra-HD video content, but they face an uphill battle against streaming services that are already there, nevermind that it will be a few years before 4K TVs enjoy any kind of significant consumer adoption.  And while Blu-ray is seeing some interesting applications, such as Facebook’s “cold storage” backup system, optical storage will likely never again see the same consumer usage it once enjoyed.

Windows XP: News flash: Windows XP is old - 13 years old!  With approximately 30% of Web-connected PCs still using Windows XP, it is by far the most popular and long-lived modern home-PC operating system. However, it has been superseded first by Windows Vista (ugh), Windows 7 (awesome!), and now Windows 8.1 (ugh, ugh, UGH). You might still find it to be a functional operating system, but Microsoft disagrees, and on April 8th Microsoft will no longer release critical system updates, including security patches. If you’re online and using a Windows XP computer, it’s time to upgrade. The sad news is you’ve really only got three options:

Switch to Linux - Linux is free and pretty easy to use these days, even for newcomers, but none of the software you’re used to like Microsoft Office will run on it, or at least, not without some serious know-how. There is, actually, a fourth option: give up on PCs entirely and switch to just using a smartphone or tablet.  It’s not as crazy an option as it used to be - high-end mobile devices pack some serious power and increasingly large amounts of storage. When paired with a Bluetooth keyboard, you can get by quite handily with a mobile device for most purposes, unless you're a PC gamer, graphic designer, or some other manner of media content creator.

Fax Machines: What is a fax machine? Nothing more than an extremely low-resolution scanner paired with a stone-age modem. Technologically speaking, they have been leapfrogged several times by several technologies.  So why in the world are we still using them? Ease of use is one reason. I don’t know about you, but I’ve never met an all-in-one printer with fax capability that I liked. Though they can deliver a better-looking product and transmit them faster than traditional fax machines, most of them have hellish user interfaces.  Availability of broadband access is another reason. Though a report cited in an article on The Next Web tell us that 70% of the United States has broadband Internet access at home (a figure that I find somewhat dubious), that other 30% is still a very large number of people. Not to mention that connectivity in any form does not indicate capability on the part of the user to scan and transmit documents. Oh, and let’s not forget email attachment limitations - if a scanned or digital document is especially large, there’s a chance your free email provider will not let you attach it to an outgoing message.

I’ll be honest - if I’ve got a hard copy document that does not have a digital counterpart, and I need to get it to somebody quickly, a simple fax machine, however outdated, is still a far more appealing option than all the superior tech that has arrived since and should be - but isn’t - easier to use.  The only technology I see that could supplant fax is smartphones.  With smartphone cameras and apps like Genius Scan for iPhone and Android which will take pictures of documents and convert them to decent-looking PDFs, fax machines might finally have an actual competitor.

Non-Kindle eReaders: I don’t like Amazon’s book business. In the short-term, their prices are good for consumers, but they are steadily eroding the value of the book, both in monetary terms and in the general view of the purchaser. Hardcover books pre-Amazon were overpriced, but post-Amazon they are far cheaper than their actual worth.  And Amazon is no better for ebooks, which are even cheaper still.

That said, if you are insistent on using ebooks, you should be using Amazon. Their prices, customer support, and the fact that they were the first business to market with an actual affordable product has allowed them to virtually own the ebook space. If you’re new to ebooks, go with Amazon. Borders has been closed for years now, Sony has decided to shutter their own ebook business, Barnes and Noble’s Nook business continues to underperform, and the only way you can read Apple ebooks is with a very pricey iPhone or iPad.

The only reason you should still be using anything that’s not Amazon is if you have already purchased a large number of ebooks from another retailer, or if you need an ebook reader primarily for PDF, ePub, and other open document formats, many of which Kindles do not support. For better or more likely for worse, Amazon has won the ebook war.

Feature Phones: I did recently publish a post on why it’s still a good idea for some consumers, not to mention businesses, to wait on the purchase of a smartphone. I stand by that post and my belief that feature phones, with their relative ruggedness and longer battery life, still have a place in the mobile market. They are nonetheless on their way out. Like the fax machine, I think they will always have some space in the communication electronics market, but like fax machines, they aren’t enjoying much in the way of improvements or variety.   MP3 Players: It’s hard to believe that MP3 players are 16 years old! Though the iPod is the quintessential MP3 player, there were a few others, such as the Diamond Rio PMP300, that date as far back as 1998.  If the iPod had anything going for it, aside from its revolutionary interface, it was surely the brevity of its name!  Since the 2007 release of the first iPhone, however, both iPods and MP3 players, in general, have been dead men walking. Why carry a dedicated MP3 player everywhere when your smartphone could do that and so much more? The obvious answer is storage. Initial models of the iPhone and Android smartphones didn’t have much more than 16GB at the most, and that storage space had to be shared with the OS, the apps, and whatever media, like pictures and movies, you were carrying with you. MP3 players, on the other hand, were basically just laptop hard drives wrapped in a candy-coated user interface that could store hundreds of gigabytes of MP3s.

Smartphones have since grown in storage capacity, but that matters less than the steady domination of the music market by streaming services like Pandora and Spotify.  Now music doesn’t have to be stored anywhere - it streams “from the cloud” as it were.  I don’t view these services in any better light than I do Amazon’s book business, but like Amazon and ebooks, they are rapidly supplanting stored MP3s as the default method by which we listen to music.

Point-and-Shoot Digital Cameras: As they say, the best camera to use is the one you always have with you - that, of course, being your smartphone.  Cameras on old feature phones were terrible - low resolution, usually no flash, no focus, and no image stabilization or lighting options all led to some truly horrific pictures.  Smartphone cameras, on the other hand, have improved drastically in the last seven years, and there’s little need for cheap point-and-shoot digital cameras anymore.  Professional photographers will usually insist on the best equipment they can afford, and most everyone else will be content with their smartphone camera.  The market in-between is quickly becoming obsolete.   Dedicated Portable Game Consoles: Back in 1989, I received my first Nintendo Gameboy.  It really was a revolutionary product - a game system that was almost as good as the original 8-bit Nintendo Entertainment System on the go!

Sure, its screen was black and green, had no backlight, and was only 2.6 inches measured diagonally (how did my eyes ever see well enough to play that thing?), not to mention that the device itself chewed through 4 AA batteries in only a matter of hours, but it is still one of the best-selling video game consoles in the history of the medium.

However, just as with cameras and MP3 players, we now have smartphones, many of which are actually more powerful than the current portable game consoles, the Nintendo 3DS, and the Sony PlayStation Vita. Combine that with a much larger library of games, most of which are free or only cost a few dollars, and a permanent place in the pocket of not only “core” gamers, but, well, a good chunk of the world’s population, and you’ve got a product that is quickly choking out the need for any dedicated handheld consoles.

Lifelong gamers like myself who have played video games almost as long as the medium has existed tend to look down our noses at mobile games on smartphones and tablets.  Mobile games have no physical controls, the vast majority of them are, to us, insultingly simple, and even the games that you pay for are usually riddled with in-app purchases begging you for more money at every turn.  That’s changing though, with a number of peripherals for mobile devices like the MOGA that add physical controls and games, especially on iPhone and iPad, that are growing in quality to rival games for the 3DS and the Vita.  This may well be the final generation of portable game consoles.

It's hard to accept how quickly tech goes out of date.  Your smartphone and tablet?  Five or ten years down the road you'll look back on them the way you would a stone tablet. Google Glass? Apple's long-rumored iWatch?  Please - wearable tech will be so passé when consumer biotech really ramps up, and it will eventually. Though it may leave technologists such as myself scratching our heads, the point of tech is the user experience, not the tech itself. As long the experience continues to improve and become ever more entrenched - and it will - the tech will become almost invisible in our day-to-day lives. Food for thought.