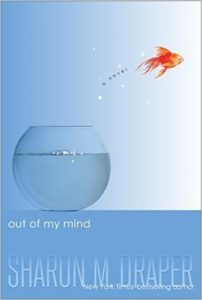 Originally published in 2010 by Jacob Puckett, an 11-year-old guest reviewer.

"Deep within me, words pile up in huge drifts. Mountains of phrases and sentences and connected ideas. Clever expressions. Jokes. Love songs . . . But only in my head. I have never spoken one single word. I am almost eleven years old." (Excerpt from Chapter 1)

Out of My Mind, by Sharon Draper, is a striking book about a girl named Melody Brooks who has cerebral palsy, a disease that disables you so you can’t walk, can’t control your body movements, and, most frustrating to Melody, can’t talk. Every "normal" kid at school thinks that all the "special" kids are either dumb as dirt, crazy, or both! But most kids don’t know that just because you can’t speak or walk doesn’t mean that you’re not smart. Melody is a genius, but nobody suspects it, except Ms. V, Melody’s sitter.

Melody can see and smell different styles of music. For example, classical music appears bright blue and smells like fresh paint to her. Jazz is brown and tan and smells like "fresh dirt." Her favorite music, country, appears yellow and smells like sweet lemons. She also has a photographic memory and can outsmart her doctor, especially since he's not that smart.

Melody communicates through word cards, but she wants a more sophisticated way so she can be better understood. Eventually, she is given a special computer that lets her communicate with her thumbs. For me, this is the happiest part of the book.

This was not a book that I would have picked up off the shelf to read, but after we read it orally in class, all 26 of us loved it. We were begging our teacher to read more every day. I’ll say that there are some sad parts at the end, so more sensitive readers may want to be ready for some surprises!

Out of My Mind is full of twists and turns, shocks and surprises, and as you round the next corner, you never know what to expect! After we finished the book, Melody has stayed at my side, showing me the world as she knew it.