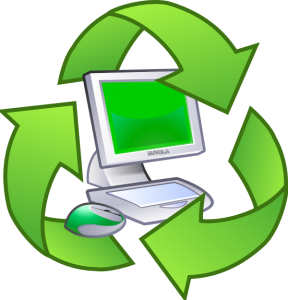 Updated November 15, 2013: Your old computer is capable of one more major feat: helping to cure diseases.

Updated October 16, 2013: This post was published earlier this year in February.  It has since been revamped to reflect more specific and robust re-purposing solutions covered in my recent workshop on the topic.  If you read this before, read it again. There’s a lot more here to love - I promise!

Now that we’re all hooked on our tablets and smartphones, let’s face it - those old “PeeCees” are getting less and less use in our everyday lives.  But that hardly means their usefulness has run out!  Here are some great ideas to extend the lives and functionality of your aging hardware.

Dedicate it to disease research

I wrote about this a few years back, but it definitely needs repeating.  If you're done with your computer, then go to the Stanford Folding@home project page and install their program.  By running this program with a constant Internet connection, your computer will be simulating protein folding sequences to help Stanford medical researchers look for treatments and cures to serious ailments like Alzheimer's, Parkinson's, Huntington's, and many types of cancer.  Every added processor helps.  You don't have to do anything but keep the computer connected to the Internet and let the software run.  That old machine will be helping to save lives!

Turn it into a media center

Your living room widescreen isn’t much more than a huge computer display.  Many laptops and desktop PCs come with HDMI ports these days, so connect it to your TV with an HDMI cable (and beware: if you’re asked to pay more than $20 for ANY HDMI cable, I don’t care how much gold it has, you’re being had), grab a wireless keyboard & mouse combo and off you go, watching silly cats in 40+ inches! If you’re running an older desktop without an HDMI port (sorry, this doesn’t apply to older laptops, but your TV might have a VGA port if you’re lucky), new video cards can be had for cheap from online retailers like Amazon and NewEgg, but you’ll need to be sure that your computer can handle them.  Follow these eHow directions to check on the compatibility of your system with a particular video card or take your PC to your trusted electronics expert for the upgrade.

Of course, an unaltered PC experience on an HDTV is not an ideal solution.  You want your computer to act like other media appliances with a streamlined and intuitive interface.  Enter XBMC!  XBMC was originally designed as an application for the original XBox and stands for XBox Media Center.  These days XBMC is available at no cost for Windows, Mac, Linux, and even the Raspberry Pi DIY computers as a standalone application that will transform your machine into a highly customizable media center powerhouse.  Learn more about the software on their homepage.  XBMC can be controlled with a variety of dedicated remotes and there are also free remote apps for both iOS and Android!

Turn it into a network storage server

Many households these days have multiple laptops and/or desktop computers.  Setting up one computer to share files such as music and movies between them all will cut down on time, frustration, and redundant storage.  Pick out one computer, make sure it’s connected to your local network, uninstall any unnecessary programs to free up storage, maybe add a high-capacity USB hard drive, and follow these steps from lifehacker.com for setting up Windows 7 HomeGroups (or Windows XP or Windows 8).

The above steps assume that all the computers in your home are running Windows.  They do not take into account Macs, Linux machines, or mobile devices.  There is another solution, but it requires an entire PC dedicated to file sharing and absolutely nothing else, so an older computer for which you no longer have any use is recommended.  The solution is FreeNAS, a free server running on a modified version of the FreeBSD operating system.  It requires a bit more computer savvy than simply setting up home groups for Windows computers, but the payoff is a home file-sharing solution to end all others.  Download the free software here and get some instructions here.  The instructions call for a rather more powerful computer than the one you might have just sitting around, but you work with what you’ve got

Turn it into a Steam Box

Steam is the largest name in buying and playing PC video games.  With the right hardware, Steam can easily rival the upcoming XBox One and the PlayStation 4.  If your desktop computer is powered by a 2 GHz Intel Core 2 Duo or more powerful processor, you can follow the steps in the HDTV section above to add a powerful graphics card capable of running the latest and slickest games.  Plug in an XBox 360 Controller for PC, hook it up to your TV, install Steam and run it in Big Picture mode so that it acts as a console.  Now you’ve got a custom gaming rig for hundreds less than a brand new console.

Steam will soon be releasing its very own free operating system centered around the gaming experience on Steam, called SteamOS.  It will be powered by the Linux kernel and will be tuned to maximize the graphical power of high-end games and hardware.  I’m looking forward to trying this out, but the question on many people’s minds is how it will handle games that are made exclusively for Windows, as the vast majority are.  I’m not worried though - Steam is such a gaming industry giant that a major move like this is going to push developers and publishers toward building future games for Linux, maybe even more so than Windows given the decline of general-purpose PCs. We’ll see.

Turn it into a media server for your smartphone or tablet

You can install media server programs to stream the movies and TV shows stored on your computer to a tablet or smartphone.  For video on iOS, I highly recommend AirVideo Server—for $3 you can stream any kind of video file from your PC OR Mac to your iDevice; on Android, get yourself set up with Emit.  For audio on iOS, all you need to do is set up Home Sharing inside of iTunes on your computer and on your iDevice; on Android, give Subsonic a shot.

Turn it into your personal cloud storage solution

Services like Dropbox, Google Drive, and SkyDrive are great for viewing and syncing your important files no matter where you are.  However much you may love them, they all suffer from one fatal flaw: Once your files are stored on someone else’s computers you’ve lost control of them. I’m not saying don’t use cloud storage services, I’m just saying exercise some caution when choosing what files to upload to them.

If you want access to your files on the go, install Tonido.  Tonido is a free program that, once installed, allows you to access your computer’s files anywhere you have Internet access.  This does require that your computer remain powered-on while you’re away from it, but the payoff is remote access to your files that you control, not a third party.  Tonido also has free mobile apps for iPhone and Android so you can access your home files on the road.

Older computers running Windows XP or Windows Vista begin to strain to keep up with modern computing demands. Media-heavy websites like Hulu, web apps, and up-to-date software like newer versions of Microsoft Office or iTunes can all take their toll.  The solution?  Get rid of Windows and install Linux.

Linux is a free operating system that anyone can download and modify for their own purposes.  As such, there are many different variants of Linux available.  The best for older computers is called Linux Mint running the XFCE desktop environment.  You can download the disc image free here.  To install the operating system, you’ll need either burn the disc image to a DVD or write it to a flash drive.  Windows 7 has the ability to burn disc image (.iso) files to discs built-in (click here for directions) but Windows XP and Vista will require a third party program, like Ashampoo Burning Studio, free edition.  Alternatively, you can create a bootable flash drive by using the Universal USB Installer.  After that, reboot your computer and use the key indicated on the logo screen for boot options, (usually F12, F10, or F2), tell it to boot from a disc or USB, and follow the on-screen instructions.

Get it ready to recycle, donate, or sell

Maybe you just want to free up some space in your home, give the PC to a friend, sell it or take it to a local electronics recycling center or Best Buy.  Whatever you choose to do, there are some steps you must follow prior to parting with your one-time technological wonder.

First, make copies of any files you’d like to keep.  Back them up on DVDs, flash drives, external hard drives, whatever your choice, because once that machine is gone, it’s gone!

Second and most importantly, you’ll want to erase the hard drive.  Most computers come with utilities to restore a factory image of the hard drive so that once the utility has completed, it’s like you’ve got a brand new computer again.  Problem is, these utilities don’t actually erase the hard drive’s contents. Even if they claim to reformat the hard drive, these utilities never do anything of the sort.  To truly erase a hard drive, download a free utility I’ve come to love called DBAN: Darik’s Boot and Nuke, burn the .iso file to a CD or copy it to a flash drive following the steps linked-to above for Linux, and boot your computer from it.  Follow this guide from Cornell’s IT department to erase every last bit of information from your hard drive.

So, don’t just scrap that old machine—be good to the environment and yourself and find a new life for it!