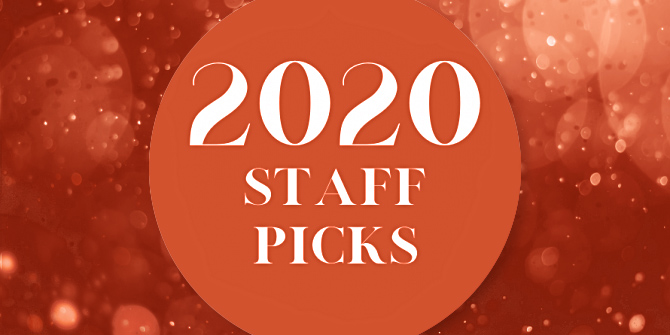 2020 has been a challenge, so thank goodness for new books to read.

Take a look at our favorite picks released in 2020!

So many good books (and movies), so hard to choose! But, we did it, and here are our favorite picks published or released in 2020.

1917: This film's camera work increases its impact by simulating one continuous shot as it follows two friends on a mission to stop an ordered but doomed attack. It is both poetic and harrowing, with cameos from some well-beloved actors. - Virginia

Boyfriend Material by Alexis J Hall: Perfect for fans of "Red, White, and Royal Blue," this cute romance made me laugh out loud. - Erin C.

Caste: The Origins of Our Discontent by Isabel Wilkerson: Captures the mood of the country right now, by mapping historically how we got to this point. - Cathy

Devolution: A Firsthand Account of the Rainier Sasquatch Massacre by Max Brooks: This book was pure fun to read, but it also stayed with me long after I finished the last page. Wrapped up in the harrowing narrative (part horror story, part scientific exploration) were themes of (wo)man vs. nature, technology vs. self-sufficiency, and inner resiliency vs. outward strength. - Adriana

The End of October by Lawrence Wright: A page-turner about a devastating virus. The book was published right before the COVID-19 pandemic commenced but eerily follows a similar pattern. - Suzanna

Entangled Life: How Fungi Make Our Worlds, Change Our Minds & Shape Our Futures by Merlin Sheldrake: This beautiful book describes the complex relationship between humans and the world of fungi. It's easy to see how all of life is interwoven. - Patsy

Hamnet: A Novel of the Plague by Maggie O'Farrell: Lose yourself in 16th-century Stratford in this beautifully written story about Shakespeare's family. O'Farrell includes rich historical detail and adds an emotional punch as she tells about Agnes, Shakespeare's wife, and the year they lost their son. - Joy

Hideaway by Nora Roberts: There's a reason why Nora Roberts is a publishing phenom. Her stories have great, realistic characters, and her plot lines keep you involved until the end. - Judy D.

Home Before Dark by Riley Sager: This haunting book draws its roots from the "Amityville Horror," but Baneberry Hall has more secrets than it has ghosts. And the secrets are far more deadly. - Meg

Let the People Pick the President: The Case for Abolishing the Electoral College by Jesse Wegman: Wegman explains how electing the president by popular vote would make every vote matter, increase voter turnout, and force candidates to appeal to voters in every state. Citing historical and contemporary popular vote advocates of all political persuasions, he shows how a presidential popular vote can be achieved with or without a constitutional amendment. - Betty

The Light in Hidden Places by Sharon Cameron: This is based on a true person, and her story will shock and amaze you. - Colleen

Long Bright River by Liz Moore: This novel is a story about the dynamics between two sisters, with a suspenseful plot taking place in a drug-ravaged Philadelphia city. - Geralyn

Unfinished Business: Notes of A Chronic Re-reader by Vivan Gornick: She rereads, often more than once, excellent books. Each reading enhances her appreciation, and she makes me want to read them, too. - Ed

A Very Punchable Face: A Memoir by Colin Jost: Such a fun and funny read! Jost comes across as self-effacing and very likeable. Just what I needed to boost my spirits. Definitely meant for adults, just FYI. - Mary Lou

Why We're Polarized by Ezra Klein: American national politics resembles a bitter team sports rivalry, erasing the opportunity for bipartisanship and meaningful dialogue. How has our two-party system, the media, and our own political identities changed over the last half-century, and what can we do about it? - Craig

Wow, No Thank You by Samantha Irby: Irby's deadpan narration of life at 40 is quietly hilarious and, as a fellow forty-something, utterly relatable. - Tracy