MATERIALS CAN BE RETURNED DURING CURBSIDE PICKUP HOURS. All CRRL branches are closed until further notice. See FAQs about library service during the COVID-19 closure. 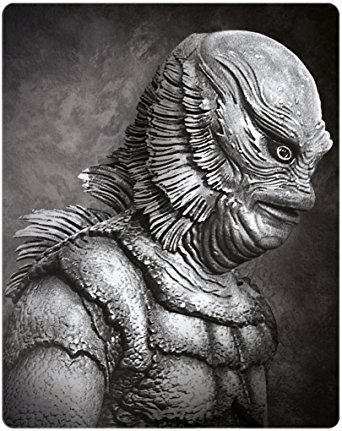 By John Gaines and Meg Slingerland

To date, humans have explored less than 5% of the world’s oceans. Whatever is lying in wait beneath the cavernous dark water is something yet to be discovered. Many scientists speculate that there are creatures such as the giant squid, which live in deep, seemingly endless trenches, hiding in the dark. Can there be other creatures as well—possibly from the Black Lagoon?

From Out of the Sea: Genesis of the Gill-Man

In 1941, producer William Alland was attending a dinner party for the classic Citizen Kane when Mexican cinematographer Gabriel Figueroa told him about a myth that involved a half-fish, half-human creature on the Amazon River. Ten years later, Alland wrote a screenplay dubbed The Sea Monster, partially based on the French fairy tale, Beauty and the Beast. Following the success of the 3D House of Wax in 1953, Jack Arnold was hired to direct the rewrite of Sea Monster which was now Creature From the Black Lagoon.

The creature was designed by Disney animator Millicent Patrick, but popular makeup artist Bud Westmore received most of the credit. While filming, the actors playing the Creature were unable to sit for 14 hours of the day in the suit and often requested to be hosed down due to the overheating caused by the bodysuit and prosthetics. The diver portraying the Creature in the underwater scenes had to hold his breath because director Jack Arnold stipulated that the Gill-Man breathed water, not air, which meant that there were no air bubbles coming up from the Creature during the swimming sequences. This attention to detail created a unique atmosphere and memorably characterized Gill-Man but made the shoot tremendously stressful.

Although the 3D Creature from the Black Lagoon is a lesser-known movie monster classic, it is simply one of the best. After a geology expedition on the Amazon discovers the fossil of a skeletal webbed hand linking both land and sea animals, another crew returns to the river to look for more parts of the possible human-sea creature hybrid. When they find out that the previous research team has perished at the hands of an unknown attacker, the crew begins to fear that a nearby “black lagoon” may have something to do with the unusual deaths. They are unaware that the amphibious creature known as “Gill-man” has been watching them—in particular, Dr. David Reed’s beautiful girlfriend, Kay Lawrence.

Beyond The Dawn: Return to the Depths

Two sequels for Creature From the Black Lagoon were released. The first of these, Revenge of the Creature (1955), deals with the efforts of a second expedition to the Amazon sent to capture the Gill-Man and what happens when he is held captive in an “educational” aquatic theme park. The first third of the film feels like a retread of the original Creature, but the attention to detail has already been diminished. The Creature costume and mask had been slightly redesigned to be less stressful for actors to wear, at the expense of the original menacing appearance - and air bubbles can now be seen rising from the Gill-Man as he swims! After the Creature is captured, the film goes in a more interesting direction, as the theme park workers mistreat and jeer at the Gill-Man, and he finds a new love, female scientist Helen Dobson.

The final film in the original series, The Creature Walks Among Us (1956), takes a unique and interesting spin on the now-familiar characterization of the Creature. While he is hiding in the Everglades, yet another scientific expedition manages to capture the Gill-Man, this time badly burning him in the process. While the Creature’s life is saved due to medical intervention, his gills fail to regenerate, his scales fall off, and he begins breathing through lungs, similar to a primitive amphibian. The rest of the film deals with the attempts by good and evil scientists to adapt the Creature to a life on land - or to exploit him for their own benefit and survival. Although Universal made no further Creature films, The Creature Walks Among Us ends on an ambiguous note, leaving the viewer to wonder whether the Creature survived or perished following his exposure to the world of humanity.

After Universal: the Creature’s Further Adventures

Many modern films featuring the monstrous concept of Gill-Man have been made since Universal’s 1954 classic. The Monster Squad (1987) used the likeness of the creature but began calling it “Gill-man” due to conflict over the name “Black Lagoon” with Universal Studios. In Tim Burton’s The Nightmare Before Christmas, there is clearly a Halloweentown creature that is supposed to be Gill-man. Television has also used Gill-man in a number of shows: The Munsters receive a visit from “Uncle Gilbert,” who proudly refers to himself as “the creature from Black Lagoon;” and Buffy the Vampire Slayer’s episode “Go Fish” has a similar creature that Buffy and her friends have to track down. The 2004 film Hellboy and its sequel Hellboy II: The Golden Army feature the character of Abe Sapien, an intelligent fishman who works for a secret agency that battles monsters and demons.

Despite these supporting roles, an actual remake of The Creature From the Black Lagoon was stuck in development for years at Universal. It came closest to being developed in the 2000s with Guillermo del Toro as director but was sidetracked in favor of an unsuccessful remake of The Wolfman (2010) and Universal’s doomed attempt to merge all of the Universal Monsters into the “Dark Universe.” With these setbacks, del Toro was forced to move his project to Fox Searchlight and produce it independently of them as The Shape of Water.

Although it makes use of the familiar concept of the Creature, The Shape of Water has a very different plot approach than earlier films. The story is told from the perspective of Elisa, a lonely mute woman who works a depressing job as a janitor at a U.S. research facility during the Cold War. One day, she finds a strange creature is being held captive there, and her life forever changes. Elisa is forced to reckon with her sympathies with the Creature and what may happen to her life and those she knows if she frees it - and whether the Creature is the one thing in the world that can truly understand her. The Shape of Water earned massive critical acclaim and received the Best Picture award during the 2017 Academy Awards, ensuring the Gill-Man would live on in the public imagination, whether or not Universal allowed him to be called by that name.