“The CRRL is very happy to offer to the community a more spacious and attractive local genealogy room, complete with historical records, beautiful, museum-quality historical wall panels, an attractive workspace, and free computers and databases for research. Please stop by any time we are open!"

A visit to CRRL’s Virginiana Room, located on the Fredericksburg Branch's lower level, is inspiring and educational. Changing exhibits have touched on fascinating aspects of local history, including the lifeways of the Patawomeck Tribe and artifacts from nearby Civil War battles.

The main hallway is lined with vertical files which hold a lot of information on local houses, people, businesses, and more. These are usually research notes or articles written for publication about our area. Enjoy browsing and photocopy what you need. On top of the vertical files are brochure guides to Virginiana resources prepared by CRRL research librarians to make your own research go much more smoothly. There are microfilm and microfiche readers that allow you to view the past through its newspapers and official documents.

Room to Piece Together the Past

Off the main hall, our quiet study room is now a quiet study and historical research room. Shelves are filled with genealogy and local history books, and there are map cases to explore, but you can learn a lot about our history just by looking at the walls. These walls can talk, through vibrant images drawn from our past. 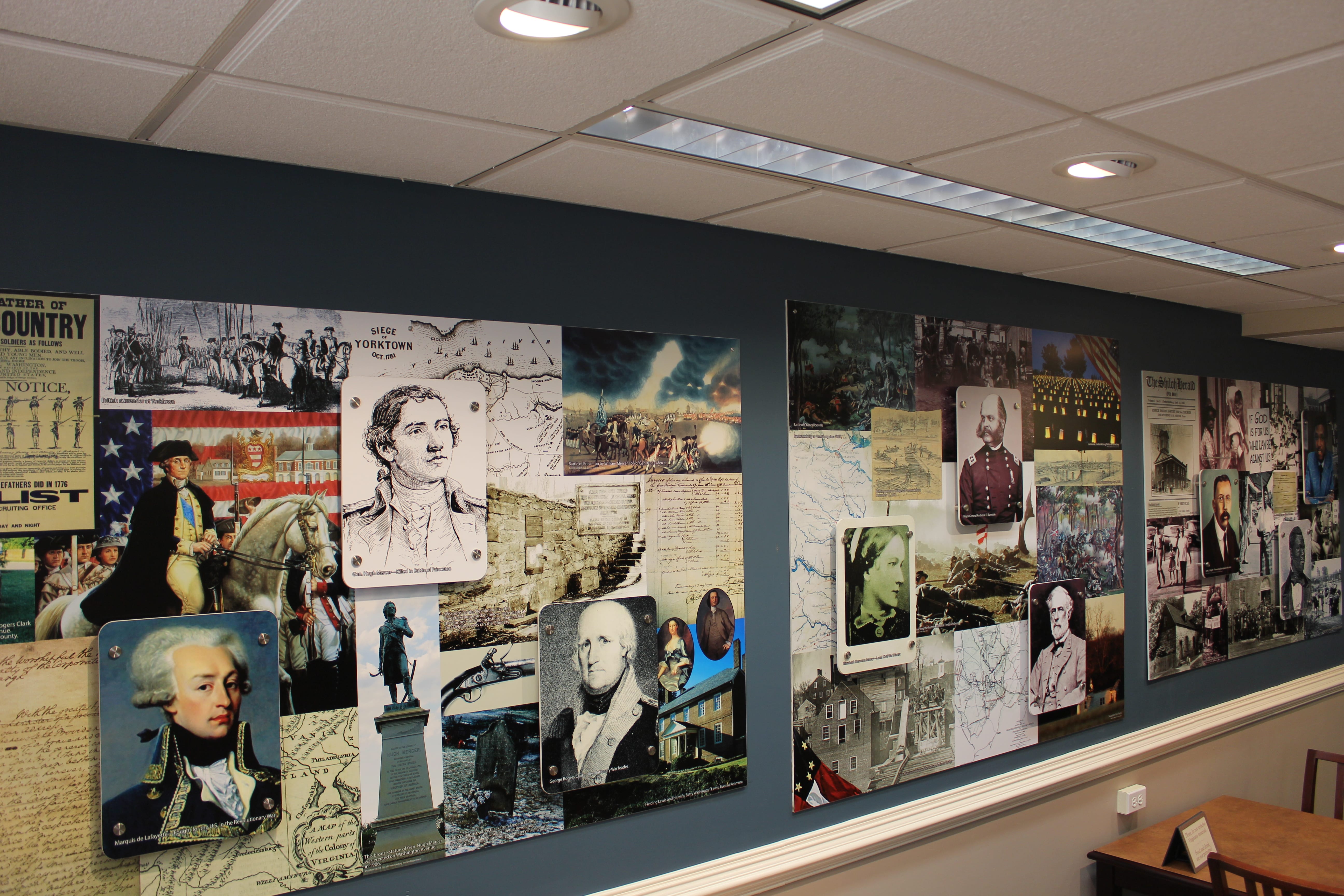 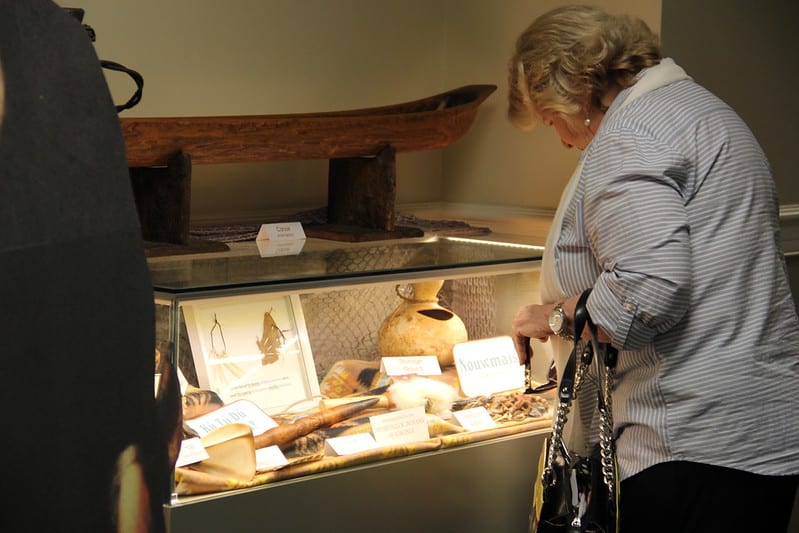 Drawn from the Revolutionary War

Part of George Washington’s boyhood was spent at what is now known as Ferry Farm, along the Rappahannock River in Stafford County. He returned to our area often where he met family and friends, including Chatham’s William Fitzhugh. The young Marquis de Lafayette, who became like a son to Washington, visited and encamped in the area.  As a place to forge weapons, raise militias, and house prisoners, our region played important roles in the American Revolution.

A Crossroads for Cannon and Cavalry

Featured on this panel are General Ambrose Burnside, who led the Union to a stunning defeat in the city at Marye’s Heights, and General Robert E. Lee, the Confederate commander who grew up at Stratford Hall in Westmoreland County. Also featured is Betty Herndon Maury, daughter of Matthew Fontaine Maury, “Pathfinder of the Seas.” She kept a diary during the Civil War. Part of her time was spent in Fredericksburg.

From times of enslavement to emancipation to segregation to civil rights demonstrations, the region’s citizens of color have been a critical part of our shared history. Most photos in this panel, ranging from the late 19th to the 20th century, are from the Fitzgerald collection. Ruth Coder Fitzgerald used the Virginiana Room’s resources in conjunction with community interviews to write A Different Story: A Black History of Fredericksburg, Stafford, and Spotsylvania, Virginia. The panel includes images of Stafford resident Anthony Burns—whose attempted escape from slavery became a national cause—post-emancipation Spotsylvania educator John J. Wright, Reverend and Fredericksburg Mayor Lawrence Davies, and many others, some of whose names we do not know.

In the main room, you can view a portrait of C. Wistar Wallace, who founded the first public library in Fredericksburg.

Also in the main room, you will see poet Maya Angelou’s words writ large: “The More You Know of Your History, the More Liberated You Are.” This message is part of a collage featuring faces and facts that make up our shared history.

A Commonwealth of Learning

Even from its humble beginnings on the theater’s stage, CRRL’s Virginiana Room drew a dedicated group of researchers and writers who took what they found there to write the stories that carried our region’s history into future. Historian and teacher Bob Hodge, whose smiling face looks down from the collage in the main room, prepared the local newspaper and magazine indices that are still in heavy use today. 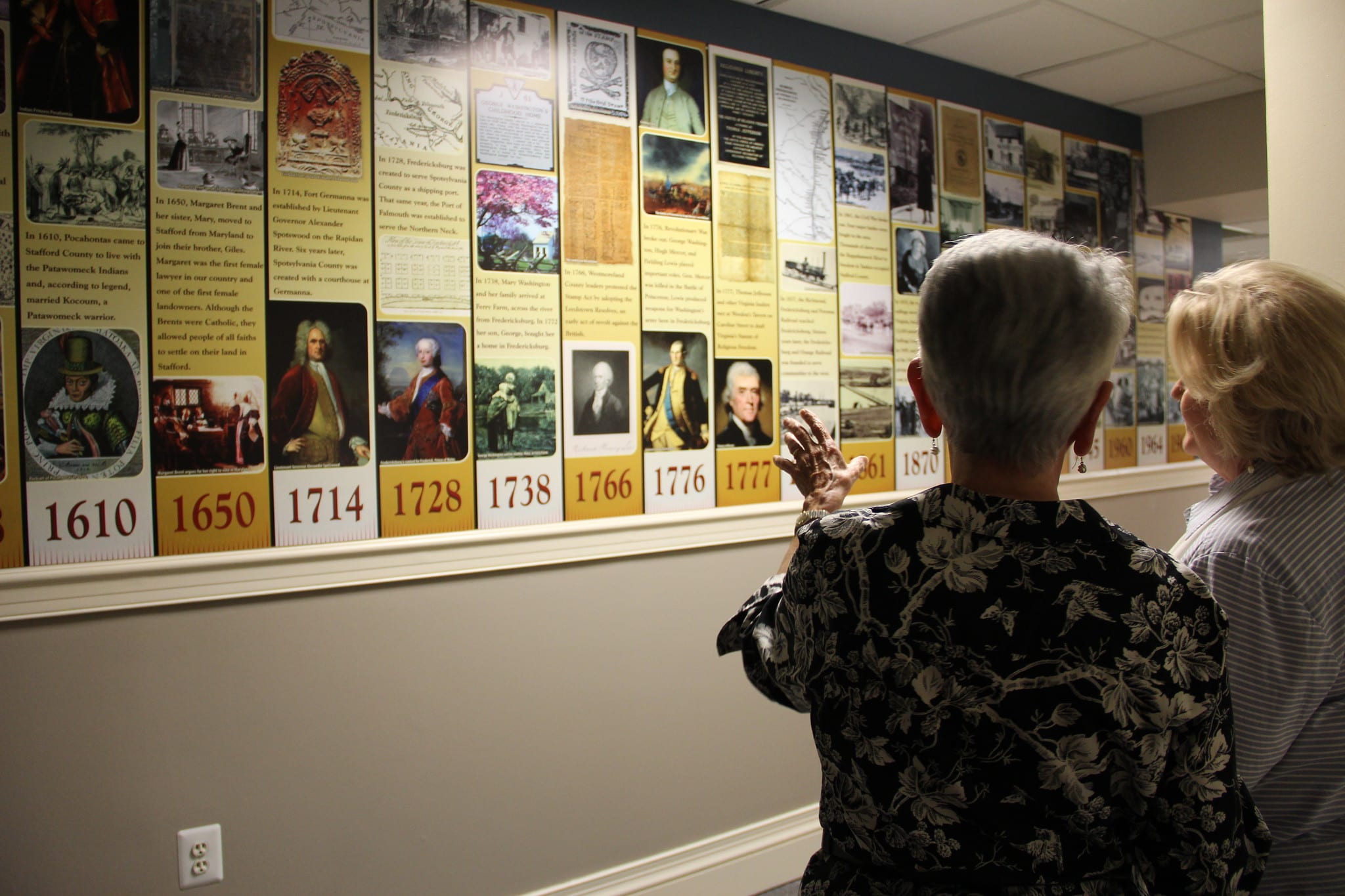 We’re Here to Help You

Please visit us in the new Virginiana Room. We are happy to show you around and help you with your genealogical research. We have local newspapers on microfilm back to 1788, and many other amazing resources. You can also contact us at virginiana@crrl.org.