Film noir is not easily defined. The actual words come from French and mean "black cinema." It was in France during the post-war years that the term was used to describe a certain set of Hollywood films that were saturated with a darkness and cynicism that was not seen before. These movies included The Maltese Falcon (1941), Double Indemnity (1944), Laura (1944), and Murder, My Sweet (1944). 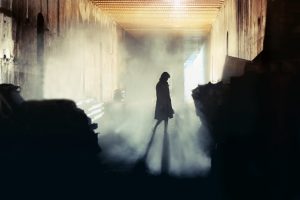 In the literature about film noir, you will have as many descriptions about the topic as there are critics and film historians writing about it. Some argue that it is a genre, while others contend that film noir is more of a tone or mood in the film, and some contend that film noir is more of a visual style. In addition, film noir cannot be defined only by characteristics in the film, because while there are certain traits that are present in many films, they are not necessarily. As Paul Schrader points out in his essay Notes on Film Noir, "film of urban nightlife is not necessarily a film noir, and a film noir need not necessarily concern crime and corruption." So then how can someone identify a film noir? Schrader contends that there were four elements present in Hollywood in the 1940s that resulted in film noir and that those four elements can also describe or define the topic.

According to Schrader, the first element was World War II and post-war disillusionment. Many of the films during the 1930s and early 1940s were propaganda-type films that were designed to cheer people's bleak outlook during the hard times of the Depression and World War II. It was beginning in the early 1940s, that film noir, such as The Maltese Falcon and Laura, began to appear. The films of the 1940s reflected the disillusionment felt in the country, especially with the soldiers returning home and women losing their jobs at the end of the war. These films, such as The Blue Dahlia, where a sailor comes home to find his wife kissing another man and their son died due to her drunkenness, showed the cynicism felt by some Americans.

The second element was post-war realism. Post-war Americans wanted an authenticity that was lacking in earlier high-class melodramas. Americans wanted a harsh view of society from the perspective of everyday people on the streets. In addition, ordinary Americans were not as interested in seeing the studio built streets they had been watching since the 1930s. They wanted to be watching actors in actual locations, such as Norma Desmond's mansion (which unfortunately was demolished in 1957 for the headquarters of the Getty Foundation) and Joe Gillis' apartment in Sunset Boulevard. The third element was the German influence. During the 1930s, especially after the rise of Nazism, many German and Eastern Europeans immigrated to the United States and helped influence the American film industry. Their main influence in film noir is with aesthetics. They brought along expressionist lighting, which used artificial studio lighting to create shadows, oblique and vertical lines, and irregular light patterns.

Finally, Schrader says that the fourth element was the hard-boiled tradition. Writers such as Dashiell Hammett, Raymond Chandler, and James M. Cain wrote many books that were eventually turned into film noir. What these authors and films have in common is a cynical and bleak outlook with a tough main character. One of the best examples of a noir film coming from the hard-boiled tradition is Double Indemnity, the script was written by Raymond Chandler from James M. Cain's book of the same name.

While those four items should provide an overview of what constitutes film noir, it is a little difficult to judge whether a film belongs to the category of film noir based solely on those categories. So here are some characteristics that may help in identifying a noir (do remember though that it is not necessary for a film to have all of the characteristics to be considered film noir).

Some of the great classics of film noir were adapted from 1930s hard-boiled fiction. Dashiell Hammett, a former Pinkerton detective, is credited with having invented the genre with the appearance of his story "Fly Paper" in Black Mask magazine. The new breed of detective appearing in hard-boiled fiction differed greatly from many of the earlier and even contemporary detective fiction. Earlier detective novels, such as Sir Arthur Conan Doyle's Sherlock Holmes, Agatha Christie's Hercule Poirot, and Miss Marple, Dorothy L. Sayers' Lord Peter Wimsey featured upper-class Europeans as the detectives and are set among manor houses and English country villages.

In contrast, hard-boiled fiction tends to have a tough, cynical detective (in many stories, the detective is actually a private investigator), who lives in a dirty city. Other features of hard-boiled fiction are that they are told mainly in narrative form, use slang, contain violence (murder, corruption), and have sexual undertones.

Check out the best Film Noir movies from our catalog.

The articles are available through CRRL Library Databases.

Hillis, Ken. "Film Noir and the American Dream: The Dark Side of Enlightenment." Velvet Light Trap, Vol. 55 (Spring 2005), 3-18. Expanded Academic ASAP. Central Rappahannock Regional Library. 14 Mar. 2008. Hillis examines how the light in film noir is not only a visual aspect of the films, but is also used as a thematic aspect to portray the post-war despair in the United States.

Naremore, James. "American Film Noir: The History of an Idea." Film Quarterly, Vol. 49, No. 2. (Winter 1995-1996), 12-28. JSTOR. Central Rappahannock Regional Library. 14 March 2008. Naremore's article provides an overview of how the films defined as film noir came to be defined as such and how the term came to be. This database is available in-house.