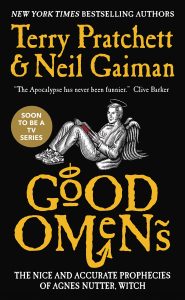 The world is going to end next Saturday, but there are a few problems - the Antichrist has been misplaced, the Four Horsemen of the Apocalypse ride motorcycles and the representatives from heaven and hell decide that they like the human race.

In April 2016, author Neil Gaiman announced that he was writing the scripts for a six-part television series as the result of a request from Pratchett, shortly before his death. In January 2017, further details emerged. Amazon.com announced that Gaiman will adapt Good Omens into a "comedic apocalyptic" miniseries, set to be released on Prime Video on May 31, 2019.

The end of the world isn't always depressing - check out these suggestions for the satirical and fan favorite, Good Omens.