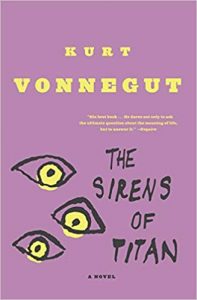 The Sirens of Titan might be one of Kurt Vonnegut’s lesser-known novels, but it deserves just as much praise and attention as Slaughterhouse-Five or Cat’s Cradle. Vonnegut’s tendency to combine satire and existential inquiry gives Sirens an invigorating edge. It is an inventive drama, one that successfully incorporates space travel, dark humor, apathetic deities, and bleak ruminations on the futility of human progress.

Winston Niles Rumfoord was happily gallivanting through space when he and his dog, Kazak, entered a chrono-synclastic infundibulum. The encounter transformed Mr. Rumfoord and Kazak into a wave phenomena whose stretched existence extends between the Sun and Betelgeuse. Every fifty-nine days, when Earth intercepts their wave presence, man and dog materialize in the Rumfoord’s home in Newport for one hour. These mystical appearances attract a fanatical level of public interest, but potential gawkers are constantly frustrated by Mrs. Beatrice Rumfoord’s commitment to privacy and control.

Due to Winston Niles Rumfoord’s unique state of being, he is not rooted in any particular time frame or era. Rather, he occupies multiple times simultaneously, giving him perfect knowledge of past, present, and future. Rumfoord’s predictions of the future horrify his wife, but she grudgingly capitulates to his desire to share a prophecy with Malachi Constant, a wealthy, arrogant playboy.

When Malachi Constant is invited to witness one of Rumfoord’s sacred materializations, he is intrigued and perplexed. His shock mutates into horror when Winston Niles Rumfoord explains that he has summoned Constant because they have met each other on Titan, one of Saturn’s moon. Constant is also told that he is destined to have a child with Beatrice Rumfoord on Mars. Having never traveled beyond Earth’s atmosphere, Constant initially dismisses Rumfoord’s vision. Gradually, however, he starts to take the forecast more seriously. In an effort to thwart Rumfoord predictions, Constant radically alters his lifestyle. As the richest man in America, he feels confident that his ample resources can guarantee him a better future. Naturally, he loses his entire fortune and gets recruited by representatives of the Martian army. Beatrice Rumfoord also fails to elude her husband’s prophecies.

After eight years on Mars, Malachi Constant’s life on Earth has been reduced to fuzzy fragments and unreliable flashes. He goes by a new name, Unk, and has had his memory erased seven times. The antenna which was implanted into Unk’s skull allows others to control him, bombarding him with unbearable pain whenever he tries to concentrate or do anything beyond his duties in the Martian army. However, there’s some irrepressible part of Unk’s brain that resists the manipulation and tries to piece together what is going on around him.

Once Unk discovers that he and Beatrice have a son, he is determined to find them and return to Earth. Unfortunately, Winston Niles Rumfoord seems to have other plans. Instead of participating in a family reunion on his home planet, Unk finds himself trapped deep inside Mercury. While Unk tries to puzzle his way out of Mercury’s core, the army of Mars attacks Earth, instigating a futile intergalactic war. The remote-controlled soldiers from Mars are easily vanquished by Earth’s citizens. However, the war serves its intended purpose – to consolidate the people of Earth into a unified “Brotherhood of man.”

When Unk makes his way back to Earth, he finds that things have changed dramatically. The new brotherhood of man has collectively embraced a new religion introduced by Winston Niles Rumfoord - The Church of God the Utterly Indifferent. Defined by its rejection of luck, providence, and the arbitrary advantages that privilege one person over another, The Church of God the Utterly Indifferent revolves around the use of artificial handicaps to create a radical form of equality. Believers voluntarily wear various handicaps to neutralize their advantages and gifts. This method of creating equality is also explored in one of Vonnegut’s short stories: “Harrison Bergeron.”

Unk’s return to Earth creates an elaborate spectacle. Initially hailed at the Space Wanderer, Unk is eventually identified as Malachi Constant and exiled because of his former life as a favored, frivolous man represents the antithesis of human equality. Unk/Malachi Constant/Space Wanderer is exiled to Titan, where he discovers the true meaning behind what has happened to him. While it seems as though his fate has been meticulously controlled by Winston Niles Rumfoord, the actual explanation is even more disillusioning and absurd.

While The Sirens of Titan features a convoluted plot, Vonnegut manages to make all of the disparate elements cohere. It is an ambitious story, one that is simultaneously depressing and profoundly amusing. Even though Sirens was originally published in the late 1950s, it has aged remarkably well. Vonnegut’s tone feels fresh and his satirical barbs have retained their bite.