Raffi may sound like he’s singing nonsense (well, I suppose he really is!), but there’s a method to his silliness. What he is playfully introducing and emphasizing is a pre-reading skill called Phonological Awareness. In other words, the rhyming and alliteration he so wonderfully uses help a child hear and play with the smaller sounds of words, which, in turn, lays the foundation for sounding out words when beginning to read.

Articles and studies like the one found here support the importance of this skill as a stepping stone for literacy. Caregivers can easily incorporate play that builds phonological awareness, as in the following examples:

Just as studies have shown that young children learn best by playing, so Phonological Awareness is learned best by simply having fun and letting the silliness loose! And, of course, read! Children’s books abound with alliteration and rhyme, but here are a few suggestions to get started.

Imaginative and alliterative sentences (Leonard’s lobster loves licking lollipops!) highlight each letter of the alphabet. Encourage your children to make their own silly sentences with their names.

A simple, repeating rhyming pattern combined with an introduction to colors and animals make this a classic for the earliest learner.

The natural rhythm and rhyme of this book encourage foot-stomping and hand-clapping!

Who doesn’t like pretending to jump up and down on the bed with each syllable?

Animals sit on objects that rhyme with their names. What would YOU sit on? Dad on a pad? Mom on a pom-pom?

After reading the book, ask what other words rhyme with a rhyming pattern, such as Sam, ham, etc.

Have your children guess which body part comes next (hint--it rhymes!). If they have trouble, give them a choice of body parts and repeat the rhyming word.

Read through the book once, then point out the rhyming words the second time through. If your children get the hang of it, have them guess what rhyming word comes at the end of the sentence. 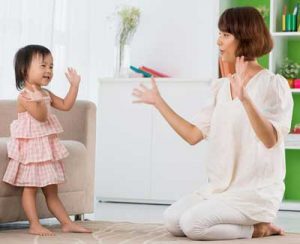