For the second year, Central Rappahannock Regional Library (CRRL) has been selected to receive a competitive grant from the American Library Association (ALA) to host a reading and discussion program for at-risk youth about teen violence and suicide.

As one of 75 Great Stories Club grant recipients selected from across the country, CRRL will work with a group of teens at the Rappahannock Juvenile Center (RJC) to read and discuss three books in which protagonists deal with issues surrounding teen violence, bullying, and suicide. The grantees nationwide represent 55 public libraries, 17 school libraries, one academic/college library, and two prison libraries.

The book titles, under the theme "Structures of Suffering: Origins of Teen Violence and Suicide," include: Thirteen Reasons Why, by Jay Asher; It's Kind of a Funny Story, by Ned Vizzini; and Romeo and Juliet (No Fear Shakespeare Graphic Novels), illustrated by Matt Wiegle. The titles—selected by librarian advisors and humanities scholars—were chosen to resonate with reluctant readers who struggle with complex issues such as incarceration, violence, and poverty. 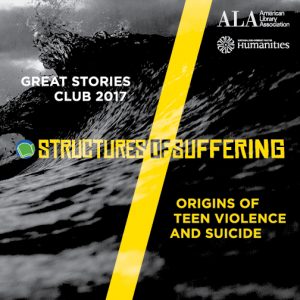 CRRL will receive 11 copies of the three books, which will be gifted to the book club participants. CRRL will also receive training and resources to aid in leading the book group.

"It is an honor to present these titles to the residents at RJC. Thank you to the American Library Association and the National Endowment for the Humanities for the opportunity to promote literacy to these at-risk youth in our community. Additionally, I am grateful for RJC staff whose support and collaboration make the success of this program possible."

Ashooh visits RJC residents twice monthly and has provided library services there since 2008. In addition to discussing the titles made available by the Great Stories Club grant, Ashooh shares other titles of interest, instructs residents on the use of online library resources, shares and discusses TED Talks with the group, and maintains an up-to-date circulating collection of titles that show the current needs and interests of the residents.

The Great Stories Club grant allows Ashooh's work with RJC youth to have even more impact. As a result of receiving the Great Stories Club grant in 2016, youth at RJC received a visit from Andrew Aydin, the award-winning co-author of March, a graphic novel trilogy based on the life of civil rights leader and congressman John Lewis. March: Book Three won the 2016 National Book Award for Young People's Literature.

Since its start in 2006, ALA's Great Stories Club has reached 670 libraries in 49 states and more than 30,000 young adults (ages 13 to 21). The grant is administered by ALA's Public Programs Office in partnership with the Association for Specialized and Cooperative Library Agencies (ASCLA), including the Library Services for Youth in Custody and Library Services to the Incarcerated and Detained interest groups. The Great Stories Club is made possible by a major grant from the National Endowment for the Humanities: Celebrating 50 Years of Excellence.