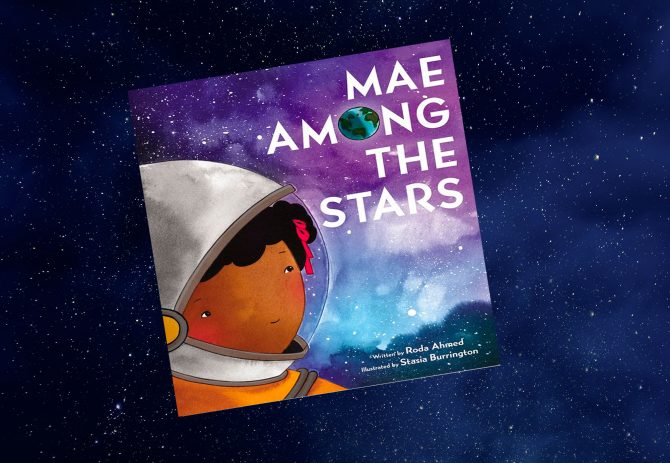 February is Black History Month and presents a great opportunity to highlight stories by and about African Americans. As a reader and a librarian, I am delighted at the increase in children’s books published each year by and about African Americans, giving us more books about influential individuals like scientists, artists, and entrepreneurs and also about average, everyday people. Central Rappahannock Regional Library’s Youth Services librarians have created booklists entitled Our Stories: The African American Experience, which include books with stories from yesterday, stories from today, and works of poetry.

Some of my favorite books on the list are picture books written for and about young children that allow the youngest readers to see children like themselves in a story. Like the characters in the story, young readers may also be dreaming about what they want to be when they grow up, getting dragged down by negative ideas, or feeling angry at injustice.

Mae Among the Stars by Rhoda Ahmed
For the youngest readers who are starting to dream about what they want to be when they grow up, this picture book about Mae Jemison’s dream of becoming an astronaut is based on a true story. When young Mae declares that she wants to see Earth from outer space, her parents tell her that she will need to be an astronaut to do that. When Mae asks if being an astronaut is something she can do, they tell her “If you can dream it, if you believe it and work hard for it, anything is possible.” When Mae announces to her class she wants to be an astronaut, her teacher suggests she should be a nurse instead. Saddened by this response, Mae begins to doubt herself, but her parents tell her, “No one can stop you.” Mae follows her dream and becomes the first African American woman in space.

My Hair Is A Garden by Cozbi A. Cabrera
Continually teased about her hair since she was little, one day MacKenzie turns to her neighbor, Miss Tillie, for help. Miss Tillie takes MacKenzie into her garden where they talk about all the colors in the garden, the variety of plants, and how, even though they all look different, MacKenzie believes they are all beautiful. Miss Tillie explains how much care it takes to keep all the plants and trees healthy and beautiful. MacKenzie comes to understand that her hair is like a garden, and it needs the same love and care every day: nourishment from a healthy diet, tender washing and combing, and ignoring other people’s negative opinions that can grow like weeds. The vibrant illustrations in this picture book capture MacKenzie’s emotions as well as the undulating beauty of Miss Tillie’s garden.

The Youngest Marcher by Cynthia Levinson
At age nine, Audrey Faye Hendricks of Birmingham, Alabama, knew what she wanted: she wanted to eat inside the ice cream shop; she wanted to sit on the main floor of the movie theater; she wanted the same nice school books the white kids had. In the midst of the Civil Rights Movement, she heard the Reverend Shuttlesworth, the Reverend Bevel, and the Reverend Dr. King preach about unjust laws and marching against injustice, but the adults in Birmingham were afraid to march because they could be fired for protesting. When Reverend Bevel suggested the children march instead of the adults, Audrey volunteered with other young people to march on the very first day. She didn’t know at the time that she was the youngest known marcher in what became known as the Children’s Crusade. After spending seven days in jail along with thousands of other young marchers, Audrey was released and saw the effects of her protest when the segregation ordinances in Birmingham were rescinded two months later. The illustration style and bright colors in this picture book work to continuously remind the reader that Audrey was a young child who bravely stepped forward to fight for her rights.