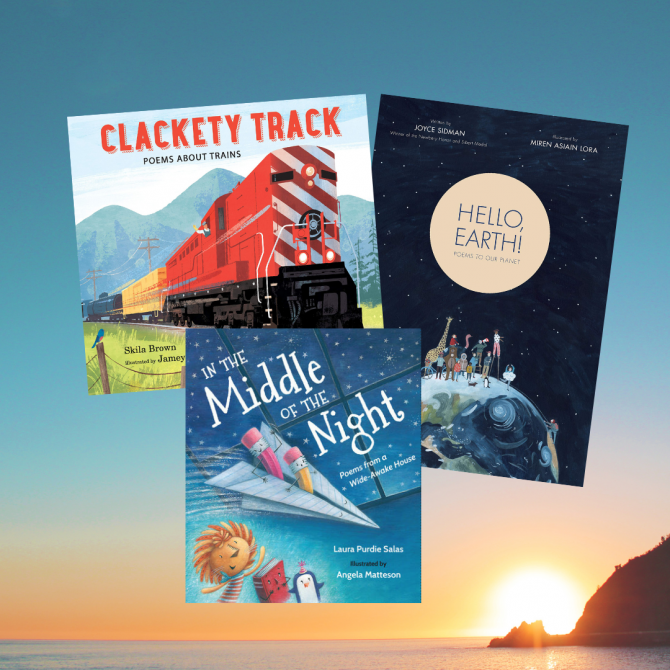 April is Poetry Month, and it’s a great time to share some poetry with a child. The rhyming words, rhythmic cadence, and succinct style of poems make them engaging for children and fun for adults to share aloud. There are as many styles of poetry as there are readers to enjoy them. Whether the child in your life enjoys animals, outer space, or just being silly, there are poems out there for them.

Clackety Track by Skila Brown, illustrated by Jamey Christoph
Freight train, bullet train, zoo train, dinner train. Each kind of train gets focused attention with its own poem describing the work it does and how it is special. A short section of back matter provides even more information for train-loving kids.

Eek, You Reek! by Jane Yolen and Heidi E.Y. Stemple, illustrated by Eugenia Nobati
Who knew there were so many animals that truly reek? Sure, we think of skunks, but Reek introduces us to even more: there are haiku about stinky insects and poems about the tamandua (anteater), hoatzin (reptile bird), and many other smelly creatures. Though the verses are humorous, they also draw attention to how the bad smells these animals emit protect them from predators and serve other purposes.

Follow the Recipe by Marilyn Singer, illustrated by Marjorie Priceman
How fun can poems about recipes be? So fun! There are recipe poems for “success in cooking” and recipe poems about measuring:

There are recipe poems for patience and adventure, for love and disaster. There’s even a “recipe for following recipes.” Bold, whimsical illustrations embellish the artful feel of this collection.

Hard-boiled Bugs for Breakfast by Jack Prelutsky, illustrated by Ruth Chan
These short comic poems are sure to be memorized and repeated for laughs. Bumblebees making cottage cheese, a mandolin playing lizard, and a kangarooster are among the silly characters at the center of these verses.

Hello, Earth! by Joyce Sidman, illustrated by Miren Asiain Lora
Each poem gives a question, a reflection, or a concern expressed to Planet Earth. Some poems express awe at the Earth’s size and how much the Earth has changed over millennia. Others focus on specific wonders, such as fiery volcanoes, craggy mountains, and the deep currents of the ocean. One is left with a sense of wonder at all the Earth holds and that many questions still remain about its mysteries.

In the Middle of the Night by Laura Purdie Salas, illustrated by Angela Matteson
While children are fast asleep, the objects in their room begin to come alive. Stuffed animals and toys dance and play games, pencils take flight on a paper airplane, and clothes relax off hangers. The night is filled with activity and a little bit of mayhem, all while the children of the house are dreaming.

In the Past by David Elliott, illustrated by Matthew Trueman
Short, snappy poems capture the unique features of prehistoric creatures from the Cambrian through the Quaternary periodw. Dinosaur lovers will enjoy the detailed illustrations as well as the concise way that key characteristics are conveyed, such as for “Yutyrannus”:

Your discovery in China created quite a stir.
Could dinosaurs be feathered?
They could. You were.

A Song for Gwendolyn Brooks by Alice Faye Duncan, illustrated by Xia Gordon
Duncan’s verse tells the story of Gwendolyn Brooks, who became the first Black writer to win the Pulitzer Prize. Growing up on the South Side of Chicago, facing criticism from neighbors and teachers, but always having the support of her parents, Brooks developed her craft early in life. Duncan intersperses Brook’s poems throughout this book, including some written in her childhood. It is often difficult to condense down the life of such an important person so that it fits into a children’s book, but Duncan does a beautiful job of conveying the struggles, successes, and passion of Brooks’ life.