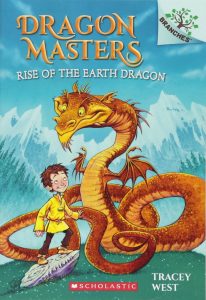 For young readers who have mastered the leveled or beginning reader, there is a great sense of accomplishment. They are independent readers! Bring on the chapter books! That can be a pretty big jump, though. Many of these children would feel intimidated with the heft and vocabulary of Harry Potter, Percy Jackson, or Diary of a Wimpy Kid. Early chapter books can be a great transition to the rich world of children’s fiction, as they are less word-dense than a traditional chapter book, have illustrations throughout, and are just long enough to give a sense of accomplishment when finished but not so long as to seem insurmountable. Like fiction for readers of any age, early chapter books come in a wide range of genres, from realistic to science fiction to fantasy, so there are early chapter books to fit any reading taste.

The Alien in My Pocket series, by Nate Ball, is for fans of science and science fiction. In book one, Blast Off! an alien spaceship crashes into Zack’s bedroom. But it’s not just any spaceship. It’s a miniature alien spaceship, with a miniature alien inside. Zack must help Amp the alien repair his ship so he can get back to his home planet, but not before Zack and Amp cause some serious chaos around town. Science tidbits are included throughout the story as natural parts of the plot—for example, talking about pressure when figuring out how to launch Amp’s spaceship.

Readers who love princess stories may enjoy The Princess in Black series, by Shannon Hale. Princess Magnolia has typical princess responsibilities such as holding parties and hosting visitors, but she also has a secret identity as The Princess in Black, who is responsible for fighting monsters. Her monster alarm goes off at the most inconvenient times, but Princess Magnolia must answer the call, nonetheless, to defeat the monsters and keep her kingdom safe.

In Kristin Earhart’s Race the Wild series, young people compete in a race called The Wild Life, a competition that takes them around the world exploring various wonders of the animal kingdom. Readers experience the race’s adventure, drama, and suspense as teams compete to beat each other, beginning with Rain Forest Relay. Each book in the series is set in a different place in the world and has “Creature Features” throughout, which give details about animals the young explorers encounter during the race.

Readers who enjoy stories about real-life situations may enjoy Julie Sternberg’s Eleanor series. Book one, Like Pickle Juice on A Cookie, finds eight-year-old Eleanor having the worst month of her life when her world is turned upside down because her beloved babysitter, Bibi, has to move away. The story follows the ups and downs Eleanor experiences as she adjusts to this major change in her life.

The Dyamonde Daniel series, by Nikki Grimes, is another realistic series, this one focused on third-grader Dyamonde Daniel, who has moved to a new school. The series follows Dyamonde and her friends as they learn life lessons about friendship, challenges, and helping others, beginning with Make Way for Dyamonde Daniel.

Scholastic’s Branches line produces engaging early chapter book series that bridge the gap from leveled reader to traditional chapter books. All the Branches series have fast-moving, compelling plots and an easy-to-read format with plenty of illustrations, and I recommend them all (there are several in addition to what I mention here). If you have readers who like monsters, a little creepiness and suspense, The Eerie Elementary series, by Jack Chabert, or The Notebook of Doom series, by Troy Cummings, may be up their alleys. Love silly stories about pseudo-superheroes? Try The Kung Pow Chicken series, by Cyndi Marko, beginning with Let's Get Cracking!. Fans of fantasy and stories about kings and knights may enjoy The Dragon Masters series, by Tracey West, which follows a group of young people as they train to work with dragons.