IF I HAD to choose between reading nonfiction history or historical fiction, I’d choose young adult sci-fi. Meaning, history is not in my comfort zone. It conjures memories of poring over 500-page textbooks with a highlighter, trying to stay awake, and hoping for a passing grade in American History. Like many assumptions, I’ve been proven wrong and am learning that reading about historical events, whether fact or fiction, can be fascinating.

Case in point: The Things They Carried, Tim O’Brien’s revered novel of the Vietnam War. It’s not something I’d have picked up of my own volition. But it’s Central Rappahannock Regional Library’s NEA Big Read selection for this spring, and, as one of the event organizers - and the one who gets to pick up O’Brien from his hotel! - I thought I’d better read it.

And, so I did. The Things They Carried was a quick read - not easy, but worth it. The novel is based on O’Brien’s real-life experiences fighting with an American platoon during the Vietnam War. Its title is literal, the stories centered on the various objects the soldiers kept on their persons during the war: a love letter from a woman who fell out of love long ago and a girlfriend’s pair of 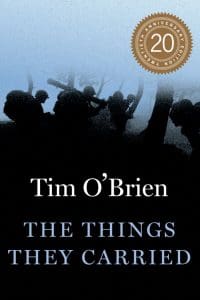 stockings used as a blankie, among others. It’s heartbreaking and reminded me of Jack Pearson’s Vietnam flashbacks on This Is Us. Googling out of curiosity, I learned O’Brien served as a consultant on season 3 of the hit show, lending authenticity to the heart-rending Vietnam experiences of Jack and his brother, Nicky.

If you’re still not hooked, consider the many reasons why we should read about history, even if we’re not interested.

Author Linda Kass puts it beautifully: "Reading history allows us to understand what happened. Reading historical fiction allows us to be moved by what happened. Even after we know the facts, we continue to search for sense and meaning. The historical novelist exposes the reader to the inner lives of people across time and place, and, in doing so, illuminates history’s untold stories, allowing the reader to experience a more complex truth."

Historical nonfiction and historical fiction bring the past to life, encouraging empathy and helping us understand that past events inform the future. Plus, discussing a book with other people brings the author’s words to life and expands your horizons.

Our libraries will read The Things They Carried in all of our book groups during March and April. 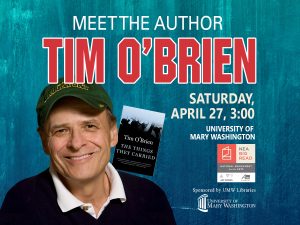 If you want a broader picture of the Vietnam War, you can attend our libraries’ “Perspectives on the Vietnam War” events this spring. Meet Vietnam War writers Steve Watkins, Jon Malay, and Wayne Colton; view a mobile exhibit from the United States Marine Corps Museum, and learn about the Vietnam Veterans Memorial Museum collection (a fascinating parallel to The Things They Carried).

Our main event, sponsored by the National Endowment for the Arts and the University of Mary Washington, features a lecture and book signing by O’Brien at UMW’s Dodd Auditorium on April 27 at 3 p.m. For the full list of events and more information, visit librarypoint.org/vietnam.

Here are some other recommended reads:

Vietnam by retired Lt. Col. Wayne Colton. A first-hand account of an Air Force Intelligence officer, a Spotsylvania County resident who served as strategic advisor to the Vietnamese Air Force from 1966–67. His fluency in the Vietnamese language allowed him unparalleled access to commanders and leaders in both the U.S. and Vietnamese military structure.

War in Our Wake by Jon Malay. A Stafford County resident, Malay served on board the destroyer USS Benjamin Stoddert, one of the last ships to leave Vietnam in 1975. Three days after the last Marine Corps helicopter lifted off from Saigon, the author and his Navy shipmates became the very last American military presence of the Vietnam War.

The Eaves of Heaven by Andrew X. Pham. With a life spanning three wars—the French occupation of Indochina, the Japanese invasion in World War II, and the Vietnam War—the author’s father served as a soldier for South Vietnam and endured torture as a prisoner of war before seeking escape as Saigon fell.

The Lotus Eaters by Tatjana Soli. A novel that follows an American combat photographer in the Vietnam War as she captures the wrenching chaos and finds herself torn between the love of two men.

On Blood Road by Steve Watkins. This adventure novel for teens will engage adult readers, too. In 1968, rebellious Taylor is dragged to Saigon, where his father is in the U.S. Embassy. Taylor sneaks out to watch the Tet celebration and is captured by the North Vietnamese Army, forced to survive as a prisoner on the road.