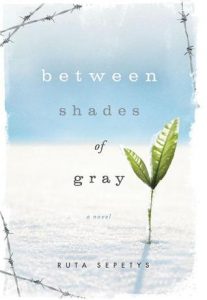 We are all very familiar with the atrocities engineered by Adolph Hitler, but less is heard about the atrocities that occurred at the direction of Joseph Stalin. Twenty million people were murdered under his leadership. In the book Between the Shades of Gray, Ruta Sepetys gives a very compelling account of the Soviet invasion of the country of Lithuania in 1941.

Lists of people who were considered enemies of the state were compiled and these people were removed from their homes and workplaces. These people were often professors, teachers, writers, artists, and librarians. The men were sent to prison and the women and children to forced labor camps - some of which were located in Siberia and the Arctic Circle. These individuals were separated from family members and forced to live in extremely harsh conditions with none of the comforts of home. They were not given food or medical attention. The women and children were shoved into railroad cars and sent away without ever being told where they were going.

The main character in this book is named Lina. She, her mother, and her younger brother are removed by force from their home and sent to Siberia. In Siberia, which is harsh enough, to begin with, they have to scrounge for anything to eat.  Even one potato becomes a luxury for the prisoners. Beets become a treat. The prisoners are forced to dig with shovels which have no handles, and they sleep on the freezing cold floor of a shack.

Lina is convinced that she and her family will be reunited with her father, who has been sent to a prison. Lina never stops searching for ways to locate him and communicate with him. She does discover where he is being held while she is drawing a portrait of the cruel and ego-driven camp commander. By the way, Lina does not choose to produce the portrait but she is forced to do so. At great risk to herself, Lina steals documents that she finds on the commander's desk and is able to determine the location of her father.

Lina's artistic ability proves to be valuable in other ways also. She is able to document the events taking place and the people involved by drawing pictures secretly and hiding them. She also sends some to her father in the hopes that they will reach him and give him the strength to persevere. In fact, much of the paperwork and documentation of this horrifying time in Baltic history has been destroyed, and it is only through the art and music of the people who survived that the true story is told.

This is a story of survival and love. It is a horrifying account of atrocities that took place in recent history. For about 50 years the countries of Latvia, Estonia, and Lithuania disappeared from the map. There are people alive today who remember that time, and their experiences need to be told. Ruta Sepetys has accomplished that in a very compelling and moving story.