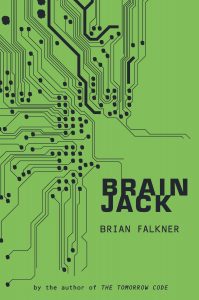 Sam Wilson is 14 years old, lives in New York City, and is a computer genius. It is not unusual for Sam and his friends to hack into computer systems and fool around.  In fact, computer gaming and use have reached a whole new level in Brain Jack, by Brian Falkner. In Sam's world, being addicted to computer gaming has moved from the basement to gaming lounges. There are individuals who spend their entire days hooked to gaming systems and do nothing else. This book begs the question ...is this a possible future?

Sam likes to hack into systems for fun and to see if he can shut them down and then get out without his identity being detected. One day he decides to disrupt the structure of one of the country's largest telecommunications systems. He is able to move through the system undetected for a while using his computer hacking skills. However, unusual activity is noted by the web security team working for the large company. Sam realizes that he has been spotted and decides to get out quickly. There is a flurry of activity that follows as Sam scrambles to finish the job and remove any evidence that could link this security breach back to him.

Sam thinks that he is home free. He got out before any of the security systems were able to find him ...right? Shortly after this incident,  there is a knock at his door. Sam is removed from his home and put in prison. He is given a choice: serve jail time for the crime he has committed or go to work for the Homeland Security Cyber Defense Division. Well, given that choice what would you do? Sam's unique ability has been recognized by the government, and they have great need of his services.

Brain Jack is a very fast-paced book with high-intensity action. In this near-future world, individuals have moved beyond using a keyboard and are now accessing the web with neuroheadsets. These headsets are being used by the general population and government officials. It is like having the internet in your head. The consequences and implications of this apparatus create high stakes and plot twists.

The contemporary themes in this book are like something right out of the headlines. This one will keep the reader guessing right up to the very end, and the action never stops.