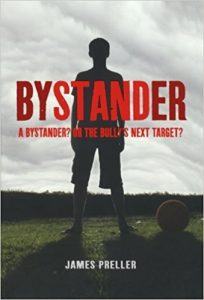 Eric is thirteen. His family has moved to Long Island. They are in a new place and he is in a new school, but all this happens without his Dad. His Dad did not move with them. He is elsewhere and suffering from depression. In Bystander by James Preller, the reader sympathizes with Eric as he makes all these new adjustments in his new life. He misses his dad, and his mom is very busy trying to create a typical life for her children.

Eric is the new kid in town and in school. He meets a group of middle schoolers while on the basketball court one day. As the dynamics of the group reveal themselves, Eric is quick to realize that Griffin Connelly (the leader of the pack) is not such a nice guy. In fact, he is a bully. One of the main targets for his mean antics is David Hallenback. David is under the mistaken assumption that he is part of the group and a friend of Griffin's. That is not the case.

Eric does not take part in the bullying but he is a bystander. He begins to realize that even though he is not actively tormenting David, by doing nothing he is condoning the cruel behavior. The school officials are aware of the bullying. It is discussed in the classroom. Yet it still continues. Eric decides that he cannot remain complicit and stand by while all this is going on. In fact, it comes to a head when Griffin pushes Eric to the edge and he decides to put a stop to all the bullying once and for all. The actions he takes are believable and would seem realistic to a teen in today's world.

Preller does a nice job capturing the middle-school experience without crossing over into a high-school mentality. The actions and voice are authentic. He accurately depicts events as they could unfold at any middle school in the U.S. Preller has created a book that is profound enough to allow great discussions without being so graphic as to disturb some of the younger readers. Bullying is a contemporary concern, and James Preller has given us a book that adults and teens can read and talk about for a long time.