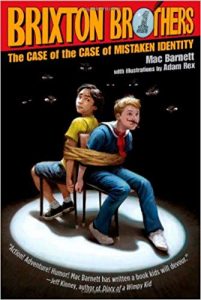 Steve Brixton definitely doesn’t have a brother, and he absolutely is not a detective. He’s just a huge fan of the old Bailey Brothers detective stories, which entirely make up Steve’s top 59 list of favorite books.

So why does everyone keep calling him a detective? That’s the central question in The Case of the Case of Mistaken Identity, by Mac Barnett. Steve simply came into the library on a Saturday morning to research this stupid paper on needlework when a bunch of sinister looking people dressed all in black started flying down on ropes, bursting through windows and chasing him without mercy. This couldn’t possibly be related to his overdue fines…could it?

No, there’s a whole other reason that this team of secret agent librarians (yeah, you heard me) are pursuing Steve. Apparently, they think he’s been hired to track down and steal a collection of classified American secrets that date all the way back to George Washington. According to them, this is the exact sort of thing most detectives are hired for, and hiring a twelve-year-old to do the job is the perfect front.

It’s not like Steve is totally unprepared for this sort of thing. He has read most of the Bailey Brothers books twice…and a few of them thrice, but the books are a tad outdated and also full of stereotypes. For example, did you know that there are only three types of criminals and that they all walk with a limp?

The problem is that Steve just doesn’t feel like he’s a detective. He can’t throw a punch like Shawn Bailey, first-class boxer. He also can’t drive a car yet, and most detectives get into some pretty extreme car chases every now and then. But no matter how many times Steve insists that he’s not a detective, he keeps finding himself acting like one, like when he sneaks into a criminal hideout disguised in an eye patch, mustache, and sailor suit. And he’s started keeping a notebook full of clues and possible suspects.

The Brixton Brothers series is both exciting and hilarious. It’s the only book I’ve ever seen where a kid out-bikes a renegade bookmobile, and then dusts for fingerprints using hot chocolate mix. This is funnier and more relatable than Encyclopedia Brown and the Hardy Boys ever were. I’m wildly looking forward to reading the next Brixton Brothers book, The Ghostwriter Secret. Get these books now, so you don’t have to bust out your magnifying glass to find a copy later.