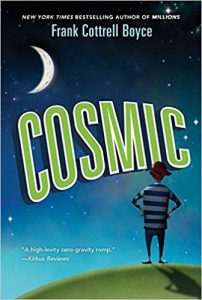 You know how, once in a great while, you finish a book and it was so good that you want to start reading it all over again? That’s what happened to me with Frank Cottrell Boyce’s “Cosmic.”

As the book opens, Liam Digby is explaining that he’s not really on a school trip, as he told his parents. Instead, he’s lost in outer space aboard the rocket ship Infinite Possibility and he’s “all right…ish.” How did he get there?

Liam is a twelve-year-old kid who’s so tall that he’s easily mistaken for an adult, as he discovers when he and his classmate Florida wander around town together after school. Stopping by a car dealership, Liam is approached by the salesman, who assumes Florida is his daughter. Soon enough Liam finds himself invited to take a flashy Porsche for a test drive. To his relief, his taxi-driving father brings this unnerving experience to an end before Liam has to actually put the car in gear.

But when he enters a competition to win a place on a secret amusement park ride, Liam finds that posing as Florida’s father has its advantages: he is chosen to be the sole adult in charge of the four kids who’ve been selected by the Drax Foundation to secretly ride a rocket ship out of earth orbit. Soon after launch, the kids fight over who gets to man the controls, and the next thing they know, their ship has tumbled out of orbit and they can no longer see Earth.  It’s not all bad, though; as Liam says, “Being doomed is Not Good. But being weightless is Outstanding.”

Since the other kids, except Florida, believe that he’s really an adult, Liam has to man up and get them out of this dilemma. And although he hopes his father can come to his rescue again, he knows that’s not really possible. Luckily, his experience playing World of Warcraft is invaluable when it comes to problem-solving. He even uses tips from his dad’s book on how to talk to teenagers when things get tough.

How Liam and the kids manage to save themselves makes for a story that’s filled with heart-stopping suspense, lots of humor, clever plotting, and a couple of great surprises. But it’s also about dads – the ones who get you out of trouble, the missing ones, and the ones who do their best even when they’re not sure what to do.

Cottrell Boyce has also written Millions, about two kids and an unexpected bag of money, and Framed, about a nine-year-old boy, some great art, and a village filled with eccentrics.

A book trailer for Cosmic is below. Read an interview with the author here.