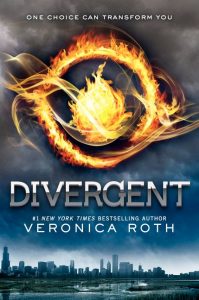 Divergent, by Veronica Roth, is an example of dystopian young adult fiction at its best! It takes place in a Chicago of the future - in a world that has been rebuilt after society collapsed. In an attempt to avoid the problems of the past, this new Chicago society is divided into five factions - Dauntless (bravery), Amity (friendship), Erudite (knowledge), Candor (truth), and Abnegation (selflessness). Each faction follows a strict code of conduct; each has its own ideas, and each has its own role in governing the new society. At the age of 16, every person throughout the city must go through a simulation designed to show him or her which faction would be most suitable to join.

For our heroine, Beatrice Prior, the prospect of the simulation and subsequent choosing ceremony is not a pleasant one. Beatrice feels conflicted because she’s always felt out of place in Abnegation, but she's not certain she'll have the courage to leave and turn her back on her family. To leave one’s faction would be doing just that because, in this new society, it’s faction over blood. Unfortunately, instead of being given a clear path to take by her simulation advisor, Beatrice is told that she's what’s called a Divergent, someone who doesn't fit neatly into any of the factions and is therefore considered highly dangerous by the leaders of society. Beatrice is ordered to keep her results secret and never to speak of them again.

At the next day’s Choosing Ceremony, Beatrice shocks her family and friends by choosing to become Dauntless. In one fell swoop, she’s cut ties with the world she knows and jumped headlong into the most elite and dangerous faction in the city. Upon arriving at her new home she adopts a new name, Tris, and is immediately immersed in a life-threatening initiation process to prove her worth as a new Dauntless. The stakes are very high indeed because in the faction where courage is king, only the strongest survive.

Will Tris have what it takes? Did she make the right choice? Will she discover what it means to be a Divergent in her world? To find the answers to these questions and more, read Divergent, by Veronica Roth.