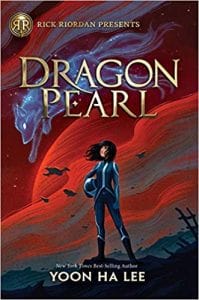 Min leads a boring life on a dusty little planet on the outskirts of the Thousand Planets civilization. Her family has long had Fox powers - the ability to shapeshift and the power to charm people into cooperation. But she’s never been allowed to use them. The one person who understands her frustration is her older brother Jun, but he joined the Space Forces and has been gone for over a year. When an officer from the Space Forces shows up to let them know that Jun has gone AWOL, everything changes. Min knows Jun would not leave of his own free will, so she does what anyone would - she sneaks onto a freight ship to track him down.

Along the way, Min teams up with various cadets, creatures, and supernatural beings. The further she gets away from home, the closer she gets to the truth about her brother and the mysterious Dragon Pearl. This legendary artifact has the power to transform entire planets, and, though it went missing centuries ago, many still seek to control it. As Min travels through space, she realizes that her brother, the Dragon Pearl, and the fate of the Thousand Planets are more intertwined than ever before.

Yoon Ha Lee’s Dragon Pearl is a brilliant mix of fantasy and science fiction, combining Korean mythology, a coming-of-age story, and the thrill of space travel into an epic adventure. Min is quick and clever, but also impulsive, making certain obstacles worse along the way. The characters are multidimensional, and, while not always human, easy to relate to. A great choice for fans of Loki’s Wolves and Star Wars, Lee’s story moves at an efficient pace, keeping readers enthralled with suspense, betrayal, and nail-biting action.