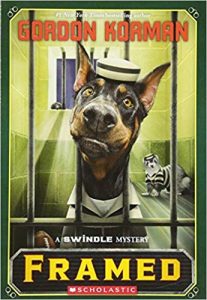 You met Griffin Bing and his friends in Swindle and followed their escapades in Zoobreak.  Now Gordon Korman has brought the gang back in his latest installment—Framed.  Griffin always seems to find trouble even when he is not looking for it.  In this latest adventure, Cedarville Middle School has become the recipient of a Super Bowl ring.  It is put on display in the school's trophy cabinet.  Suddenly, it goes missing. Griffin is held responsible for the heist. His friends decide to prove his innocence and set out to find the real thief.

Griffin has an eclectic group of friends. There is Ben Slovak, who suffers from narcolepsy and has a therapeutic ferret, and Savannah Drysdale, an avid animal enthusiast.  Logan is a budding actor, and Pitch is a super athlete.  Together with several other characters, the team assembles a sophisticated crime-busting enterprise as they attempt to identify the actual perp.  However, Griffin is sent to "JFK" - Jail for Kids. He is being framed for the crime. He has a reputation of being a troublemaker throughout his town of Cedarville. Even though the John F. Kennedy Alternative School is not a detention center, he is not supposed to see his friends. However, a pesky little detail like that never stopped Griffin.  There is a monitoring system installed in his home and when he ventures beyond the required boundaries a comic episode occurs.

His parents are supportive of him but feel that his behavior has gotten out of hand.  Griffin is not a bad kid, but he does make some poor choices.  The story follows him and his band of crime solvers as they try to determine what really happened to that Super Bowl ring.  Oh, and by the way - where is Griffin's retainer?  He hasn't told his parents yet that it is missing.  Somehow it shows up in the display case where the donated ring used to be.  Coincidence, or is Griffin really guilty of grand larceny?

This is a funny, fast-paced story featuring a group of students who are bright, resourceful, and inventive.  It makes a great summer read for upper elementary or middle-school readers. Although it is the third in a series, it can stand alone.  Take Framed (or the books earlier in the series, Swindle and Zoobreak) on vacation...you won't be disappointed!!