“When there’s somethin’ strange in the neighborhood, who ya gonna call?”

The memorable lyrics to Ray Parker Jr.’s theme opened one of the most popular comedies of the 1980s, Ghostbusters. The 1984 film would go on to spawn a sequel in 1989, as well as a popular animated series that would run in syndication and on Saturday mornings for many years. Ghostbusters was beloved by adults and 80s kids alike and remains a staple of happy childhood memories and cable movie channels to this day. Even though  has lingered in the popular memory long after its initial run, there was no follow-up to Ghostbusters II, giving many fans the sense that the series remained unfinished.

Over 30 years after Ghostbusters II’s release, fans will finally see a new chapter of the story this year when Ghostbusters Afterlife opens in November 2021. Join us as we go back through CRRL’s collection to look at the history of the Ghostbusters series and the steps that got us fascinated with busting ghosts in the first place.

What’s in a Name? The Battle of the “Ghost Busters”

Although it’s rarely remembered nowadays, Egon and his crew were not the first group of people that would take the name “ghost busters.” The name actually originated in 1975 with The Ghost Busters, a Saturday morning live action comedy, starring veteran comedians Forrest Tucker and Larry Storch. The Ghost Busters was produced by Filmation, a studio that produced mainly animated children’s content at low budgets. This series didn’t even try to be scary, instead focusing on slapstick pratfalls and the inherent comedy of a gorilla helping to bust ghosts. Only 15 episodes were produced. The series actually performed well enough to get a second season but was cancelled because Filmation wanted to prioritize its Shazam! series. Since The Ghost Busters was never rerun, it quickly faded from memory but would return to haunt Columbia Pictures when its feature film Ghostbusters was in search of a title—and the animated series Columbia would later produce as well. 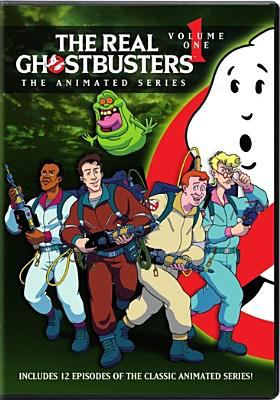 When Columbia was working on a title for its comedy ghost film, many titles were considered, but none of them seemed to take. Somehow, a film titled “Ghostsmashers” or “Ghoststoppers” didn’t have the magic to it that “Ghostbusters” did. Columbia managed to get the rights to make a film titled “Ghostbusters” from Filmation for $500,000 and 1% of the movie’s profits. Since they used creative “Hollywood accounting” to ensure that the film’s “official profits” were zero, Columbia gained the iconic title for virtually nothing. Filmation head Lou Scheimer later expressed regret for how little Filmation had settled for in the deal and believed Filmation should have tried to get the rights to make a cartoon for Columbia’s Ghostbusters in exchange for the agreement.

When Ghostbusters became a massive blockbuster, Filmation’s lack of foresight became very apparent. Columbia quickly started work on a Ghostbusters animated series, choosing not Filmation but DiC, a producer of numerous Saturday morning licensed cartoons. DiC’s overseas production studios worked fast and cheap and had The Real Ghostbusters ready to air two years after the movie’s release. Even without the rights to the Columbia film, Filmation still saw dollar signs and rushed its own Ghostbusters series (now one word, to further conflate its series with the Columbia film) into production so it could premier the same month as The Real Ghostbusters.

With deliberately confusing titles, similar launch times, and a cartoon syndication market that frequently aired them against each other on competing channels, what was the outcome of the battle of the ghost busters? Columbia’s series, The Real Ghostbusters, would air until 1991 and become a part of the happy memories of many an 80s kid, as well as being preserved in CRRL’s collection through DVD sets. Filmation’s Ghostbusters would vanish into the netherworld after one season and be consigned to YouTube channels for its remaining fans to view it. Filmation’s failure to negotiate the rights to make a cartoon based on Columbia’s Ghostbusters stands as one of the greatest mistakes in Hollywood history.

Crossing the Streams: The Scripting and Production of Ghostbusters

The road to the feature film Ghostbusters was long and challenging for Dan Aykroyd and Harold Ramis. Inspired by Aykroyd’s unconventional family and their fascination with ghosts and paranormal events, the production of Ghostbusters was plagued by difficulties with studio executives and visual effects companies from the very beginning. The entire film was nearly derailed during the scripting process in 1982 when original star John Belushi died of a drug overdose, forcing Aykroyd to turn to his Saturday Night Live castmate Bill Murray to play the role of Peter Venkman.

Aykroyd began to collaborate with Harold Ramis to make his original script (which featured travel through time and space) more grounded, and together they settled on the concepts that would define the movie by June 6, 1983. Director Ivan Reitman suggested having the Ghostbusters operate out of an old firehouse, and Ramis came up with the concept of having the Ghostbusters work as parapsychologists for a university. The film gained more of a comedic focus and differentiation between the four main characters during Ramis, Reitman, and Aykroyd’s screenplay writing sessions. Despite this, Ghostbusters remained a tough sell to Columbia to greenlight and prioritize; even the finished screenplay was far more expensive than most comedies, and it required an extremely rapid production to make it onscreen by June 1984.

Off the Charts! The Decade of the Ghostbusters

After the extensive revisions to Aykroyd’s original concept, Ghostbusters debuted to a massive audience and exceeded Columbia’s highest expectations. Three things made Ghostbusters successful: the snappy comedic dialogue the script offered all the actors, the obvious rapport between Ramis and Aykroyd, and the terrific special effects. Every character was distinct and memorable, even the ghosts themselves, not the least of which was a briefly seen green phantom referred to by the production as “Onionhead” but by audiences as Slimer. When even a one-scene ghost ends up being one of the most memorable characters of the summer, studio executives knew they had a massive success on their hands.

Ghostbusters was a megahit. Its theatrical run spanned from June 1984 to January 1985, a feat few films could match, even in the 1980s. Ray Parker Jr.’s “Ghostbusters” theme song reached the top of the Billboard 100 in many countries, showing just how widespread the pop culture recognition of the movie had become. Characters from the film like Slimer, the Stay-Puft Marshmallow Man and the Ghostbusters themselves appeared frequently in art, on T-shirts, and in pop culture references years after the film’s release. The Real Ghostbusters cartoon based on the film was beloved by children of the 1980s and was so popular that it even got a Halloween special that aired in prime time (“The Halloween Door”). Anyone who was alive during the 1980s remembered the “Ghostbusters mania” throughout the decade.

Despite being one of the great blockbusters of the 1980s, it took five years to get the sequel, Ghostbusters II, released. Negotiating the return of Murray proved to be difficult, as he demanded $10 million to star in the sequel and the other actors wanted an equal amount. The only way Columbia could get the principal cast back together was by granting them a considerable percentage of the film’s profits. While this meant the budget would be lower than if they had met Murray’s original demand, it would prove to be the film’s undoing.

By 1988, Columbia had finally signed the cast for the sequel, but scripting the film proved to be difficult. Aykroyd and Ramis were hamstrung by the studio’s demands to make the film “kid-friendly.” The edgier and more cynical humor of the original was toned down in favor of lighter jokes and more Slimer appearances. Even after the film had been shot, changes were still made, and scenes were reshot due to poor preview reception. The early version of the film did not tie together well the concept of “good” and “bad” slime with the villain, Vigo the Carpathian. In a final act of hubris, Reitman requested a release date of June 16, 1989—one week before Batman, the box office champ of the year. Ghostbusters II was not the success the first film was financially.

I’ve Been Slimed: The Wait for Ghostbusters 3

By the time Ghostbusters II was first broadcast on TV on February 16, 1992, discussion of another sequel had subsided among most fans as the Ghostbusters boom of the 1980s began to fade. Aykroyd worked on a script for a third movie through the late 90s entitled Ghostbusters III: Hellbent, but it never came close to production. Neither Bill Murray nor Ivan Reitman were interested in the Hellbent script, and a third Ghostbusters movie remained the stuff of myth and rumor.

Attempts to develop a Ghostbusters III continued during the 2010s, aided by a flood of 1980s nostalgia. At least two scripts were developed for Ghostbusters III following Hellbent: a 2008 script written by Aykroyd, Ramis and Reitman and a later 2015 script that would see Venkman return as a ghost. Neither script came close to being filmed. In 2015, Sony created Ghost Corps,a production company dedicated to making movies and TV series set in the Ghostbusters universe.

Unfortunately, the first release of Ghost Corps was a financially and critically unsuccessful 2016 reboot that had no connection to the story of the first two movies. Many people consider the “real Ghostbusters III” to be the 2009 video game, which was the last time Aykroyd, Ramis, Murray, and Ernie Hudson reprised their roles as the Ghostbusters together. In fact, the team that developed the game wanted it released as “Ghostbusters 3,” but Sony refused because they still wanted to have a third Ghostbusters movie as a theatrical release.

Return to a Haunted World

After a long history of delays, missteps, and a seemingly cursed inability to sign Bill Murray, we’ll finally get to see Ghostbusters Afterlife this year. Though it was not the “Ghostbusters III” we thought we would get years ago, it does feature most of the original cast returning, including Bill Murray as Peter Venkman. Ghostbusters writer and actor Harold Ramis (Egon Spengler) had passed in 2014. The early trailers hint at a more serious, Stranger Things-esque tone, making one wonder if the film will try to recapture the feel of the ‘80s comedies, or go for a more serious approach that explores what went wrong in the world after the Ghostbusters disappeared.

Some of us will just be happy to see the original crew on screen one last time; others will be more interested in seeing how the new characters relate to them and what sort of evil entities they confront. Will old villains like the Stay-Puft Marshmallow Man or Vigo the Carpathian return to menace the world? While you wait for the answers to these questions, come take a look at the original adventures of the Ghostbusters, opens a new window in CRRL’s collection!