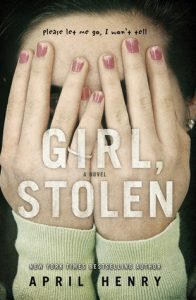 Cheyenne Wilder is sleeping in the back of her family's SUV. She is sick and her stepmother has gone into the pharmacy to pick up her medicine.  She left the engine running because she was only going to be a minute. Griffin is in the parking lot of the shopping center looking for packages in cars that he can steal.  He sees the SUV with the engine running and he steals it. Cheyenne is still asleep in the back seat. She wakes up to find that she is in her car and it is being stolen. Griffin has no idea that Cheyenne is in the back. Oh yes, and one more thing...Cheyenne is blind in Girl, Stolen by April Henry.

Surprised and scared, Cheyenne announces her presence to Griffin. He is equally shocked. He was aware that he was stealing a car but not that he was kidnapping a girl. Now it is too late for him to turn back, and he keeps driving with Cheyenne pleading with him to let her go.  He is confused, and when he learns that Cheyenne is blind his confusion grows even stronger. His only option is to take the car and the girl back to his house.

Griffin lives with his abusive father. There is also a cast of unsavory and unscrupulous characters that come and go to his house. Griffin is a reluctant participant in their illegal activities. Taking Cheyenne back to his house seemed a reasonable choice when he started but now he is second-guessing himself. He finds that he is the only protection that she has while in the house. It turns out that Cheyenne comes from a wealthy family - her father is the president of Nike. So Griffin's dad and his nefarious crew decide to demand a large ransom for her return. Suddenly, Griffin finds himself in the middle of a high-profile kidnapping.

Girl, Stolen is an exciting tale with some very tense moments. Griffin becomes the only source of help for Cheyenne as their friendship develops. The drama that ensues is fraught with excitement and heart-pumping scenes that leave the reader breathless.