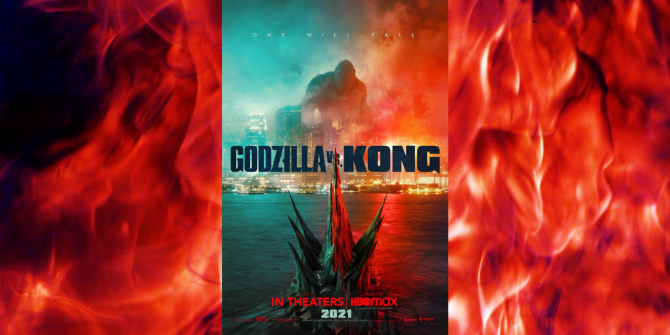 Thundering across the screen, giant monsters have been a staple of film since 1925’s The Lost World. Given the name kaiju or “strange beast” in Japan, dozens of enormous creatures have come and gone over the decades, but few have left their mark like the two legends of the genre, Godzilla and King Kong. Two very different creatures, Godzilla and Kong  have motives and powers that are as alien to each other as they are to humanity. After years of speculation and hype about which of the two is stronger, they will finally battle each other in 2021’s Godzilla vs. Kong. Join us as we scour the depths of CRRL’s collection for their past rampages, in search of evidence of who will prevail.

Of the two creatures, Kong is significantly older, with his origin predating atomic power, jet planes, and much of our current technology. It was, however, recent enough for global travel, and the desire of audiences to see strange creatures and lost worlds. Real-life naturalist and explorer William Douglas Burden was one of the first Westerners to visit the island of Komodo in Indonesia and encounter the creature known as buaya durat or “land crocodile” by the local people. Burden coined the name “Komodo dragon” and brought back two live animals; a long fascination with Komodo dragons would begin among zookeepers and audiences alike. Filmmaker Merian C. Cooper was a friend of Burden’s, had a lifelong fascination with primates, and had conceived an idea of a nature documentary about a troupe of baboons, but became strongly influenced by Burden’s stories of “King Komodo” and the mysterious island. Over time, the primate--and his reptilian enemies--loomed larger and larger. Why use baboons when it could be a giant gorilla that could battle a Komodo dragon? And why stop with a dragon, when you could use a dinosaur?

The original 1933 King Kong rolled with its larger-than-life premise for every last drop of cinematic grandeur and excitement. The actual plot is quite simple--filmmaker Carl Denham finds the mysterious Skull Island, an ideal location to shoot his latest jungle film, which will feature the beautiful star Ann Darrow. But Denham, Darrow, and the entire crew get far more than they bargain for once they find the true lord of the island, King Kong. What gives the original Kong its power is the ape himself; he was the first special effect to be treated as a film star, even given a credit in the film’s cast list at the beginning. Kong was extremely expressive and was given many humanlike qualities, including the ability to walk upright, a very articulated face, and a fighting technique that resembled pro wrestlers of the time. Kong displayed a varied range of emotions on screen, from his powerful attraction to Ann to terrifying rage to comedic confusion. He is truly allowed to live onscreen, which makes his climactic death all the more tragic.

Some attempts to recapture the thrills of the first Kong can be entertaining movies in their own right, but none can truly duplicate its magic. Released in the same year(!) as the original, the sequel Son of Kong has Denham run out of New York by lawsuits and forced to return to Skull Island in search of treasure. While there, he finds “Little Kong,” and the two team up to battle the monsters of the island and find the fabled treasure. Most of Little Kong’s screen time is dominated by comedic buffoonery, and his friendship with Denham serves as a way to redeem the filmmaker from his earlier greed and selfishness. Little Kong is a worthy successor to his dad, but the film is quite short at only 69 minutes and lacks the epic feel of the first Kong. If Son of Kong is too brief and unambitious, Peter Jackson’s King Kong is so obsessed with being the perfect version of the Kong story that it lacks the original film’s tight pacing. Jackson’s movie does many things right, including giving Ann a more compelling backstory, wonderful CGI creatures, and featuring a memorably creepy version of the “insect pit” cut from the original film. But the long runtime diminishes the visceral thrills, and some of the scenes added to this newer version don’t add to the story’s impact, even though it’s interesting to watch Jack Black’s Denham try to make the 1933 King Kong inside this film’s world. It remains an interesting film to watch and a true passion project for Peter Jackson.

None of these movies were the one that set Kong on the course to fight Godzilla. Kong’s first appearance in the MonsterVerse continuity was Kong: Skull Island, which featured a very different take on a Kong story. The film replaces the 1930s setting used by other Kong movies with the time of the Vietnam Conflict, and the original concept of trying to bring Kong back to civilization as a conquered beast is abandoned. Kong: Skull Island follows the adventures of a group of soldiers and scientists isolated on the mysterious Skull Island as they embark on a secret search for monsters. Along the way, they encounter the mysterious Kong, but is he friend, foe, or both? This film’s Kong is much larger than earlier versions, so he is pitted against creatures called “Skullcrawlers” that resemble the two-legged lizard briefly seen in the 1933 film. The film is a prequel to the rest of the MonsterVerse series and explores the origin of MONARCH, the organization that tracks and researches kaiju, and shows Kong when he was still young. It is recommended viewing for anyone interested in Godzilla vs. Kong.

A Terrible Sound Out of the Deep: Godzilla

Godzilla is the antithesis of Kong. Instead of being hidden away on an ancient island of mists, he rises from the depths, actively seeking out confrontation. Rather than being “destroyed by civilization” as Kong was, he leaves a burning ruin of all our hopes of technological progress and military superiority. His terrible roar, out of the darkness of night or from the depths of the ocean, heralds our downfall. Godzilla is not based on any single dinosaur; designer Akira Watanabe based his shape on an alligator, iguanodon (hands), tyrannosaurus (head), and stegosaurus (plates on back) combined into one creature. His most dreaded weapon, his atomic fire breath, further separates him from the actual dinosaurs, making him more like a mythic dragon than any creature that ever lived. Godzilla is the symbol of the dangers of the nuclear age, our most terrible fears of the unbalanced world we created given form and unleashed to destroy us.

All of Godzilla’s essential qualities were established in the series’ first film, Gojira (Godzilla), released in 1954 in Japan. Godzilla lacked any of the heroic aspects he would later sometimes display and is an utterly destructive force here. There is no enemy that can match him, no other kaiju for him to fight, and almost no hope for anyone caught in his path. The film’s technical limitations actually work to its benefit; the massive Godzilla suit was so heavy the actor in it could barely move, but this only serves to make Godzilla seem more intimidating and  onscreen. The film is black and white, its dark colors lending it the feel of a brutal documentary as the viewer sees the victims of Godzilla’s rampage. Unlike Kong’s defeat, which seems as inevitable as the march of civilization, Godzilla’s is the result of a scientific miracle that is never again achieved in the series. CRRL’s DVD of the film contains both the Japanese original and the Americanized 1956 version Godzilla, King of the Monsters, which features Raymond Burr.

The immediate sequels to the 1954 Gojira would keep Godzilla as a destructive enemy of humanity. The second film in the series, Gojira no gyakushū (Godzilla Raids Again), saw the first kaiju battle of the series, as Godzilla battled the spiny Anguirus. This was before the concept of good and evil monsters warring was created; both creatures were a threat to civilization, and, whoever won, Japan still lost. Godzilla was still a villain when the first “good vs. evil” monster battle was released, 1963’s King Kong vs. Godzilla. In their first battle, Kong was contrasted as a “thinking man’s monster” against the force of Godzilla, battling his reptilian foe with giant rocks, trees, and superior agility. Sadly, their fight never had a definitive winner shown onscreen; they simply fell into the sea together, and the audience heard Kong and Godzilla’s roars as the film ended, implying they had fought to a stalemate. Godzilla would return as a villain in one more film, Mosura tai Gojira (Mothra vs. Godzilla), before his role would become redefined.

In the second half of the 1960s and for many decades afterwards, Godzilla would become a heroic defender of humanity from all sorts of enemy kaiju. He would battle the ferocious alien dragon king Ghidorah, the Three-Headed Monster in several films, as well as Mekagojira no gyakushu (Mechagodzilla), a powerful robot made in his image. Godzilla films would become more child-oriented over time, especially All Monsters Attack, a movie where a young boy daydreams about visiting Monster Island and ends up in the middle of stock footage monster fights from other movies. The concept of Godzilla as hero (or at least more heroic than his enemies) would remain popular for many years and carry over into the MonsterVerse series. The first MonsterVerse movie, 2014’s Godzilla, pitted him against the MUTOs, two hideous insects that pose a threat to human civilization. The second, 2019’s Godzilla: King of the Monsters, brought his fan-favorite enemy King Ghidorah back once more in a battle to rule over all the monsters on Earth. But one creature never bowed to either Godzilla or Ghidorah…


Before the Battle: The Hour of Judgement

As Godzilla and Kong are set to fight in the latest film, many have wondered who will be the victor. The film’s director has promised a “decisive battle” as opposed to the cutaway ending from King Kong vs. Godzilla, but who will truly prevail? Both monsters will be the same size in this fight, so there will be no height or weight advantage for Godzilla. He will retain his deadly atomic fire, powerful tail, and ability to breathe and travel underwater. On screen, he has survived many more battles than Kong, defeating terrible opponents from the darkness of space and primitive creatures mutated by atomic radiation alike. Kong is not to be underestimated, however. His intelligence has increased in every film he has been featured in, to the point of demonstrating tool use in the film’s latest trailer. Kong’s strength has also increased over time, from taking down a T-Rex in the original 1933 film to fighting massive creatures in Skull Island. And there is one remaining variable in the fight: humanity’s allegiance. Will human beings be inherently more sympathetic to Kong, a creature like them on some level, or will they forsake him for the reptilian might of Godzilla? Watch all the Godzilla and King Kong movies in CRRL’s collection and decide for yourself!