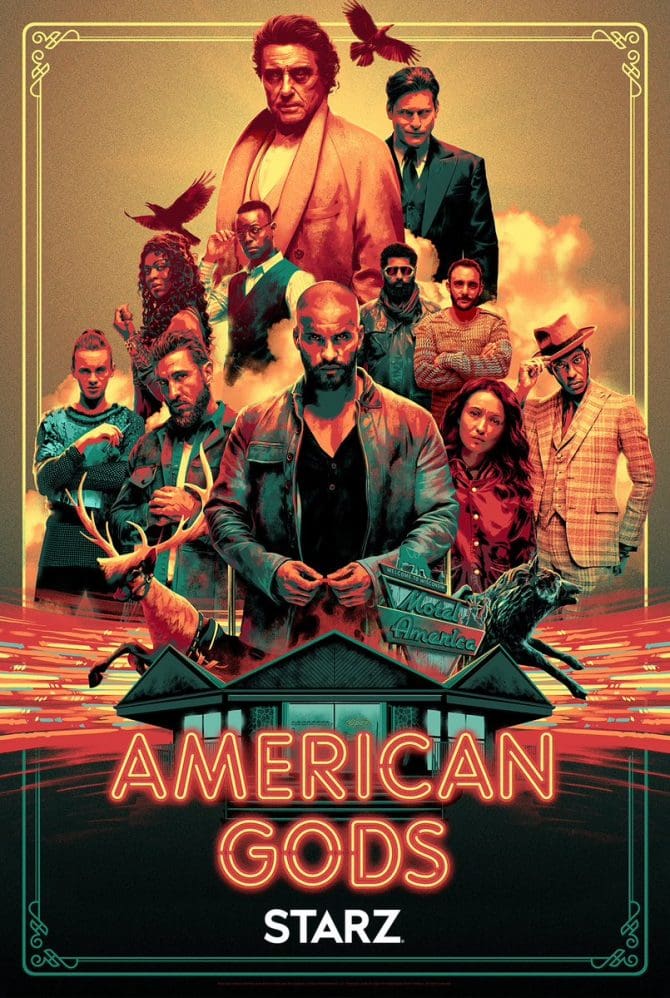 On March 10, Starz launches their second season of the hit fantasy TV show, American Gods, based off of Neil Gaiman's book of the same name. Haven't seen the first season? Place a hold on the first season now.

I grew up devouring the deeds of gods and heroes, so Edith Hamilton’s Mythology was one of my go-to books. Instead of adventures in the DC or Marvel universes, I read about the Greeks and Trojans in The Iliad and The Odyssey by Homer. My monsters were the Minotaur and Medusa - who were perhaps the first mutants in literature.

Keeping up with the gods, goddesses, and all their relatives can be a labor of Heracles if you are new to the world of Greek mythology or need to refresh your memory, but your odyssey into their stories will be rewarding. The Greek myths have had far-reaching influence on Western culture and sparked the imaginations of literary lions such as Chaucer and Shakespeare; poets such as Percy Bysshe Shelley, Robert Browning, and T. S. Eliot; and playwrights such as Eugene O’Neill.

Today, authors are still retelling, reinventing, and upcycling the myths, often from the female point of view to mirror a modern perspective.

Immerse yourself in Greek mythology with these stories reinvented by 21st-century authors:

House of Names by Colm Tόibἰn: Every kind of murder and betrayal happen in this novel as fathers murder daughters, wives murder husbands, and sons kill mothers. The tragedy starts with King Agamemnon needing the gods’ blessings to sail to Troy, so he sacrifices his daughter to the gods to receive a good wind to start his journey. Clytemnestra’s suffering at the loss of her daughter and husband’s betrayal lead to revenge. The gods do not listen to the pleas of this cursed family as many more lives are sacrificed.

The Penelopiad by Margaret Atwood: Penelope waits for Odysseus to get home from the Trojan War and reminisces about Helen of Troy, life in Hades, and her wandering husband. Showing her stylistic mastery, Atwood has twelve maidens - hanged for their supposed treachery - comment on Penelope’s story using various devices such as a court trial, a jump-rope chant, a ballad, and other songs.  Fans of The Handmaid’s Tale will enjoy the strong female voices in this novel.

Circe by Madeline Miller: The nymph/witch Circe’s coming-of-age story will enchant you. She has daddy/mommy issues, and her siblings leave something to be desired. Circe has great power and creates the monsters Scylla and Charybdis. She comes into her own when she cares deeply for Daedalus, enchants Odysseus, and raises her son, Telegonus. In the end, Circe must make the choice to be human or divine to be with her true love. The audios for both Madeline Miller books are amazing.

The Silence of the Girls by Pat Barker: Even though Achilles is at the center of this tale told by Briseis, a woman given to Achilles as a war prize, her internal monologue narrates this story of loss and survival.  After losing her brothers and husband, Briseis must learn to survive in the camp and bed of her captor. She has a rare insight into Achilles’ struggles with his sea nymph mother, Thetis, and his best friend, Patroclus.  Told from the women’s perspective, the camp and battle scenes of the Greek and Trojan armies are hair-raising and heart-breaking.  The losses are immense, but the women survive and support each other.

Gods Behaving Badly by Marie Phillips: Time-traveling gods and goddesses are perplexed with the modern world and don’t know why they are losing their powers. A light-hearted look at a London townhouse full of the immortals’ struggles as they have to get jobs: Apollo is a TV psychic; Artemis is a dog walker; Dionysius is a DJ, and Zeus is languishing in the attic. The immortal housemates also play a mean game of Scrabble. Two humans, Alice, the gods’ housekeeper, and Neil, her boyfriend, go on a quest to the Underworld to save humanity. This one was made into a movie with Sharon Stone, Kathleen Turner, Alicia Silverstone, and Christopher Walken.