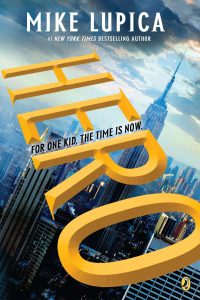 Fourteen-year old Zach Harriman lives in New York City with his mother and father. He has been living the life of a typical teen until his father is killed under mysterious circumstances. In Mike Lupica's book Hero, Zach decides that following the devastating loss of his father, he wants to get to the bottom of the story. He knows that his father was powerful and had the ear of the President of the United States. He knows that his father was very skilled in his job of "getting things done." Zach suspects that his father's death was no accident but a premeditated murder by an organization known as the "bads."

Zach's mother decides to throw herself into the presidential campaign for the candidate that Zach's father supported. Though Zach supports his mother's political efforts, he decides to turn his energies towards the investigation of his father's death. He starts asking questions. He also begins to notice that he is being followed. While walking through Central Park he is approached by a mysterious stranger who has information for him. When Zach tells his beloved Uncle John about this man, he warns him to stay away from the stranger. Who should Zach believe?

Zach also learns some interesting news about his father. His father had superpowers. Not only that but it appears that these powers are genetically passed down to the next generation ....namely Zach. So, armed with these newfound powers, Zach and his friend Kate set out on a quest to find out the truth about his father's death...or was it murder??

This book by Mike Lupica does not have the sports emphasis that many of his previous titles had. This is an action-packed thriller that mixes intrigue with fantasy. There are many plot twists and turns that keep the reader turning the pages. It is difficult for Zach to know whom to trust, and the reader will be equally perplexed. This is the story of a young man who wants to find answers, and he just so happens to be able to fly!