Detective and crime-related stories are one of the most popular genres of fiction. In literary form, detective novels are so numerous that publishing companies devote entire labels to the genre and release hundreds of entries per year. Detective/crime-related narratives have become a major part of television programming, with networks basing their entire primetime schedule around crime-related series. 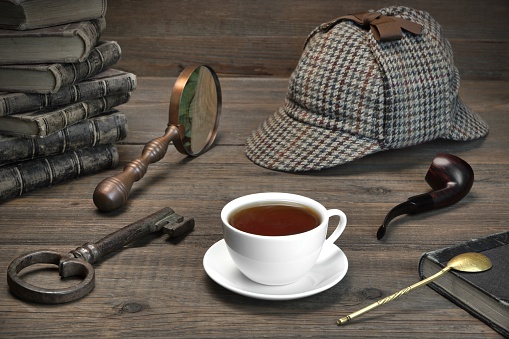 Detective fiction is such an integral part of the current literary landscape that many people have difficulty remembering all its subgenres, popular works, and notable authors. This series explores the history of detective fiction, the authors who were a major influence on its development, and books and films in its major subgenres.

Despite the continuing widespread popularity of Arthur Conan Doyle’s Sherlock Holmes, Doyle did not originate the detective story. This credit must be given to another author of the 19th century, Edgar Allan Poe. In addition to being a major contributor to the literary traditions of Gothic horror and romanticism, Poe also originated the detective story with his character C. Auguste Dupin. When the character first appeared in The Murders in The Rue Morgue (1841), the word detective did not even exist; the character’s name “Dupin” suggests the English word dupe, or deception, which Dupin utilizes in order to obtain the information he requires to solve a case.

Many of Dupin’s characteristics heavily influenced character portrayals of detectives throughout the 19th and early 20th centuries. His cold, logical method or problem solving, upper-class background, and emphasis on intense reading for clues would remain consistent in his portrayals throughout two other Poe stories, “The Mystery of Marie Roget” (1842) and “The Purloined Letter" (1844). Poe only published three Dupin stories over his lifetime before his death in 1849, although other authors have used the character--who is now considered public domain--posthumously, such as Alan Moore's The League of Extraordinary Gentlemen, Vol. 1. Cinematic adaptations of the Dupin stories are rare in comparison to films featuring Sherlock Holmes, although Universal released adaptations of Murders in the Rue Morgue in 1932 and 2004 and The Mystery of Marie Roget in 1942.

One major difference between Doyle’s detective tales and Poe’s is Doyle’s inclusion of a sidekick character to assist Holmes. Dr. Watson, although steadfastly loyal to Holmes, stands in sharp contrast to him. His approaches to problem-solving are populist and simplistic while those of Holmes is complex and sophisticated. He sees the surface of the crime while Holmes tries to plunge into the psychological depths of the criminal. He is emotional while Holmes is scientific. Yet it is overwhelmingly Watson who gives the Holmes stories their point of view, supplying narration for 53 of the short stories and all four of the novels. The interaction between Holmes and Watson and their differing methods of problem-solving is just as enjoyable for the reader as the actual mystery to solve. This relationship is perhaps even more important in the various film adaptations of the Holmes stories.

Holmes in the Age of Cinema

The Holmes stories were one of the earliest mystery series to have film adaptations produced, beginning with the 1914 version of A Study in Scarlet, all prints of which are now completely lost. Although individual adaptations of other Holmes stories starring different actors would continue to be made, the definitive Holmes film series began with 1939’s adaptation of The Hound of the Baskervilles, starring Basil Rathbone as Holmes and Nigel Bruce as Watson. Although 20th Century Fox did not create the film with the intent of starting a series, Rathbone and Bruce proved so popular with audiences as Holmes and Watson that a sequel, The Adventures of Sherlock Holmes, was produced which incorporated elements of several Holmes stories. Following Adventures, Universal obtained the rights to the series from 20th Century Fox and continued making films with Rathbone and Bruce as the lead characters.

“A Case of Identity"

The Sherlock Holmes stories remain popular to this day, and many film and television adaptations have been made after the end of the Rathbone/Bruce series. Among modern actors to play Holmes, Jeremy Brett is perhaps most associated with the role, having played Holmes in several acclaimed television series. Other notable actors to play Holmes include Christopher Lee, Rupert Everett, and, in a Russian-language adaptation popular in the former Soviet Union, Vasili Livanov. A new adaptation of Sherlock Holmes, starring Robert Downey Jr., was released on December 25, 2010, with a follow-up A Game of Shadows, in 2012. Certainly, the enduring popularity of Conan Doyle’s original stories and the many adaptations already produced in the public domain ensure that the character will remain popular for years to come.