In your backyard, they live—crawling through leaf piles, resting on flowers, buzzing around your backyard barbeques. They come in many shapes, fly, walk, and swim, but they always have six legs. Some are very helpful to your garden, while others hunger to devour your flowers and trees. They are insects, the most diverse group of arthropods and the most numerous creatures on the planet. Insects range from wasps to butterflies to mantises and learning about the many roles they play in nature can help you maintain your garden well and protect the environment.

Many of Virginia’s insects benefit people by transmitting pollen, allowing important crops and other flowering plants to flourish. Some of the most important types of insect pollinators are bees. The European honey bee is the pollinator most used by humans in agriculture, but their population has suffered because of introduced parasites and the mysterious Colony Collapse Disorder. Virginia’s native bees have become increasingly important in the role of pollinators as honeybees have suffered. Bumble bees, which are larger and rounder in appearance than honey bees, are a frequent sight in gardens even as honey bees have declined. Like honeybees, they are social insects that live in colonies and are not aggressive to humans. Virginia’s sweat bees are also important pollinators, although their tendency to be attracted to the salt from sweat can cause them to buzz around and annoy you if you’re outside on a hot summer day. Their metallic blue and green bodies can fool you into thinking they are flies. All of Virginia’s bees are useful pollinators and only likely to sting you as a last resort, so please don’t attack them.

Butterflies are also important pollinators for Virginia’s plants. There are many different types of butterflies that typically appear in our area, and one of the most beautiful of them is the monarch butterfly. This large orange-and-black butterfly has suffered population declines because it relies on milkweed, a native plant that people often eliminate with weed killer. You may confuse the monarch with the viceroy, a smaller related butterfly that is still quite common. The black-winged swallowtail butterflies are also common here, including species such as the spicebush, the pipevine, and the eastern tiger. Two smaller butterflies common in our area are the cabbage white and little yellow butterflies. Skipper butterflies are well represented in Virginia, especially the zabulon skipper, a small orange butterfly with brown spots on its wings. Be sure to have some flowering plants near if you wish to see them, especially milkweed for the monarchs.

Along with bees and butterflies, there are other pollinating insects in Virginia. Hoverflies are small flies that resemble bees but have no sting. Like bees, they feed off nectar and pollen and function as pollinators for many types of flowers. Many types of wasps, including yellow jackets, also serve as pollinators because the adults rely on nectar as a food source. Beetles are the oldest group of pollinating insects but are not the primary pollinators for most plants because their “mess and soil” method of pollination is less efficient in terms of movement than bees or butterflies. They are still very important to the primitive flowers, such as magnolias that evolved with them long ago, however. 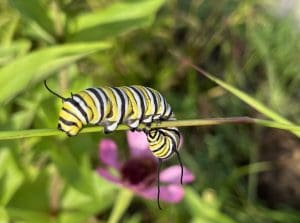 There are several types of crawling insects that are also major threats to plants in Virginia. Aphids are tiny, soft-bodied insects that have long plagued Virginia crops and gardens. They feed by biting into plants and sucking out the juices, leaving the plant wounded and weakened, especially doing damage to the leaves. Scale insects are immobile and look like a very small shell or scale formed on a tree or shrub. They bite into trees and drain sap from beneath the bark, hurting the tree’s growth and stressing it. The most damaging crawling insect in Virginia is the hemlock woolly adelgid, opens a new window. This species is not native to Virginia; it was first noticed here in 1951. It protects itself with a white “wool” that looks like cotton and feeds on conifers, especially eastern hemlock. All of Virginia’s hemlock forests are in danger from the woolly adelgid, as they have no natural defense or resistance to it.

One special type of insect pest doesn’t feed on plants, instead taking a bite into humans. Mosquitoes are flying insects that will fly onto your skin and bite in, sucking your blood before you can notice. In Virginia, you’re most likely to get bitten during the day by the Asian tiger mosquito, but other types of mosquitoes are active at night, dawn, and dusk. To keep the number of mosquitoes down, empty standing water wherever possible, clean out your swimming pool if you have one, and cut your grass short. If you need to go into the woods, especially near dawn or dusk, consider a mosquito repellent. You’ll never be completely free of mosquitoes in Virginia, but, with attention to your surroundings, you can greatly reduce the risk and save yourself from many itchy bites!

Many species of insects eat other insect pests, and these species tend to be very beneficial for humans. Mantises are some of the largest and hungriest insect predators. Three species exist in Virginia: the native Carolina mantis and the introduced European mantis and Chinese mantis. Carolina mantis are typically about 2 inches in length, while the European and Chinese mantis can reach 5 inches in length. Mantises are ambush predators that do not have a set color; they can change each time they molt, adjusting to their surroundings. They use their large eyes to search for movements, then catch their prey in their powerful front legs. Mantises eat a wide variety of insects, including aphids, grasshoppers, wasps, butterflies, and even other mantises. Although mantises will sometimes eat beneficial insects such as bees, they are overall more helpful than harmful and serve as a good form of pest control for gardens.

Wasps are important predators of many small pests, often having very specific targets for each species of wasp. With eight legs rather than six, spiders are not insects, but they are on the menu for some kinds of wasps. One species of wasp, the blue mud dauber, targets Virginia’s most dangerous spider--the black widow. Widows typically live outside, in places such as wood piles and under rocks, and their bites can potentially give you muscle cramps, sweating, nausea, and heartbeat irregularities. The blue mud dauber is not afraid of their fearsome venom, instead attacking them with its sting to paralyze them and then laying its eggs on them, providing the wasp’s larvae with a food source once the eggs hatch. This solitary wasp is very thin and relatively long (up to 23 millimeters) and is best identified by its electric blue body color. The mud dauber also serves as a pollinator for several common wildflowers, since the adults feed on nectar.

Another type of wasp, trichogramma, attacks various species of caterpillars, including the tomato hornworm. Tomato hornworms are large green caterpillars that can ruin gardens and farm crops by eating valuable vegetables such as tomatoes, eggplant, and peppers. Trichogramma wasps, which are so small they are difficult for humans to see, lay their eggs on the hornworm under its skin. The larvae of the wasp hatch from the eggs, eating the caterpillar from the inside. Eventually the hornworm will die, but the wasp larvae will spin small white cocoons on the hornworm’s back before it does. These white cocoons will hatch into adult trichogramma wasps, which will continue the cycle and find more hornworms. If you see a hornworm with small white growths on its back, don’t crush it! It will soon give rise to more wasps that will help in controlling the hornworm population.

Several other important insect predators contribute to the health of gardens and humans alike. Dragonflies are a frequent sight on lawns and trees in the summer, and each one devours hundreds of mosquitoes a day. They are related to damselflies, which are thinner and fly more slowly, and typically only appear near lakes or rivers. Both of these types of flying insects are beneficial and will help greatly in pest control. Lacewings don’t eat flying pests, but their larvae feed on aphids, so expect to see the thin green adults flying near aphid colonies in your backyard. Ladybugs are another important predator of plant-based pests such as aphids and scale insects, and their presence will improve the chances of survival for all the plants in your backyard. All these types of insects are very useful to humans and function as a great means of natural pest control.