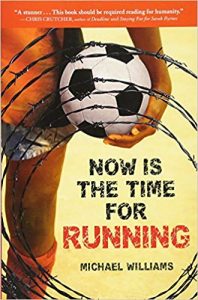 Deo and his brother Innocent live in a village in Zimbabwe. One day when they are outside in their village playing soccer, trucks with soldiers aboard arrive armed with guns. In the book Now is the Time for Running by Michael Williams, an ordinary day that started with soccer games with friends ends with tragedy and carnage. Deo and Innocent are the only surviving members of their village. Everyone else has been murdered by the soldiers. The brothers must secretly leave the village and try to find safety elsewhere. The brothers manage to escape only after Innocent convinces Deo to go back and retrieve his "Bix box" that contains all his prized possessions. Deo has his soccer ball which is stuffed with money.

Deo and Innocent must make their way to South Africa where they can work, go back to school, and find their father. The only clue they have to his whereabouts is a crumpled picture of him standing in front of a truck with a phone number on it.

As they make their way towards South Africa and freedom, Deo and Innocent have many harrowing experiences and they encounter some less than scrupulous characters. Eventually, they do escape and arrive in South Africa where they find work at the Flying Tomato farm. They are given a place to live, food to eat, and wages for their work. They also encounter a new threat and that comes from the South African residents who resent the influx of illegal immigrants who are willing to work for low wages. Deo and Innocent soon come to the realization that they are working for unfair wages and the resentment born by the South Africans is palpable.

They are led astray by one of their fellow farmworkers and left penniless and lost. No job, no money, no food. Deo ends up living on the streets. He becomes one of the glue-sniffing street kids in South Africa. Deo is playing soccer in a drug-induced fog one day but a scout recognizes his talent and skill. The scout approaches Deo and tells him about a soccer team made up of kids from the streets of Cape Town, Johannesburg, and other cities in South Africa. The kids are taken off the street, given a place to live and food to eat. They are also trained as members of soccer teams which will compete for the World Cup of street soccer. This opportunity proves to be life changing for Deo. He is able to regain his strength and sense of purpose.

Now is the Time for Running is fast-paced and riveting. The struggle and journey that Deo and Innocent endure is wrenching and dramatic. Although fictionalized in this book, young men trying to survive against harrowing conditions is played out all over the continent of Africa in real life. Backed by a story that is profound and compelling, the voice of Deo is not one that will be forgotten soon.