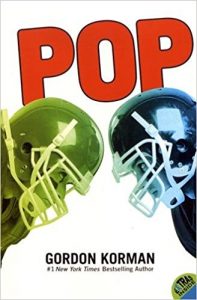 Marcus, the new kid in town, wants to try out for the undefeated high school football team in Pop, by Gordon Korman. While training by himself at a local park, he meets Charlie, a massive 50-something-year-old man with powerful football skills that he shares with Marcus. Estranged from the teammates who don’t want to accept an outsider, Marcus’s growing friendship with Charlie gives him a sense of belonging. But Marcus also begins to see that something about Charlie isn’t quite right. For an old guy, he’s a charismatic prankster who acts like a big kid, can’t remember Marcus’s name and runs away at the first sign of trouble. Then Marcus discovers that Charlie is actually a former NFL linebacker known as “The King of Pop.”

Korman’s young adult novel goes beyond the typical sports story, taking on issues that recently made news headlines. While Charlie’s family attempts to hide his condition from the public eye, Marcus tries to give Charlie what he really needs–his memories. This story is complete with emotional ups and downs, including a wild road trip to Charlie’s alma mater, a rivalry between Marcus and Charlie’s son, who also happens to be the high school quarterback and a tragedy that Korman pulls off like the master-storyteller he is. More about relationships than on-field action, Pop is an inspirational story for even non-sports fans. You’ll be cheering for Marcus and Charlie to the end.