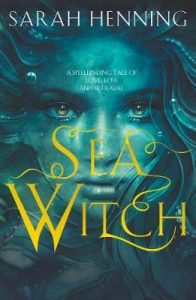 , Sarah Henning brings to life an unexpected fairy tale retelling that focuses on the villain’s background rather than that of the original protagonist. Over a century ago, Hans Christian Andersen wrote his classic, “The Little Mermaid.” As the years passed and Disney brought their version of the story to the big screen, people fell in love with the beautiful mermaid princess who was willing to risk everything for true love - by making a cursed deal with the evil witch Ursula - and, eventually, living happily ever after. What do we really know about Ursula, though? Has she always been evil? Was she spurned by someone long ago and is still brooding over the incident? Henning sets out to explain Ursula’s story and just how she came to be the sea witch.

Set in a fishing village in Denmark, we learn the tale of three friends: Nik, the crown prince; Evie, the witch; and Anna, who passed away in a tragic accident. When a young woman - who looks astonishingly like Anna - saves Nik from drowning, a series of events begins that will change them forever. As Nik begins to fall for this beautiful new addition to the town, Evie, who has so many questions about her resemblance to their supposedly departed friend, learns that there is more to the new girl than meets the eye.

For more twisted retellings, make sure to check out The Cold is in Her Bones, by Peternelle van Arsdale; Kill Me Softly, by Sarah Cross; and The Lantern’s Ember, by Colleen Houck.