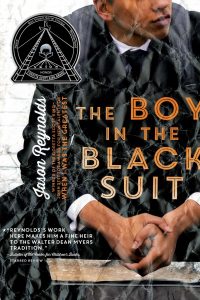 Matt Miller’s mother is dead. Every day, he wakes up and puts on the same suit that he wore to her funeral. At work, at school…everywhere he goes, Matt is The Boy in the Black Suit.

To say that Matt is dealing with his mom’s death would probably be an overstatement. Barely able to go through the motions, Matt struggles to feel normal in his daily life. He’s only seventeen, after all, and with his dad drinking again, Matt’s not sure how much more bad news he can take.

Since his dad can’t handle the bills anymore, Matt accepts a job working for a family friend, Mr. Willie Ray.

The only catch is, Mr. Ray’s business is a funeral home. When the job starts though, Matt realizes that attending the funerals of strangers is actually a comfort - even if it does mean wearing his black suit every day. It seems that witnessing other people’s sadness makes Matt feel less alone. Especially when his dad’s alcoholism takes a drastic turn for the worse.

Then Matt meets Lovey. She’s smart and independent, and she totally gets why Matt is working at the funeral home. Because Lovey has experienced her own family tragedy, and it made her every bit as tough as Matt needs to be.

The Boy in the Black Suit is Jason Reynolds’ second novel. His first, When I Was the Greatest, was one of my favorite reads of 2014, but this quieter, emotionally resonant story might be my favorite of the two. For a powerful story about grief and love and resilience during hard times, look no further than this great read.